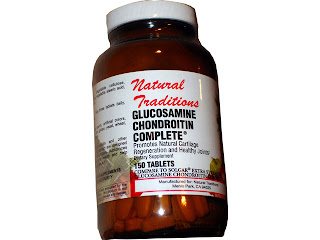 Glucosamine and chondroitin have no effect on osteoarthritis of the hip and knee. Researchers at Bern University in Switzerland ran a meta-analysis of ten trials on the two treatments and found that they perform no better than placebo - as reported in the BMJ.

The analysis confirmed what the BMJ reported nearly ten years ago. It concluded that: Our findings indicate that glucosamine, chondroitin, and their combination do not result in a relevant reduction of joint pain nor affect joint space narrowing compared with placebo. Some patients, however, are convinced that these preparations are beneficial, which might be because of the natural course of osteoarthritis, regression to the mean, or the placebo effect. We are confident that neither of the preparations is dangerous. Therefore, we see no harm in having patients continue these preparations as long as they perceive a benefit and cover the costs of treatment themselves. Coverage of costs by health authorities or health insurers for these preparations and novel prescriptions to patients who have not received other treatments should be discouraged.

The findings have been reported by the Telegraph, Independent, Mail and BBC among others. It is unlikely that now the truth is out, sales will fall. Evidence that something doesn't work has made no impact on other products. Reports like the ones here and here that antioxidants don't work have not stopped countless products being sold that proudly proclaim they contain them. Marketing rarely lets the facts get in the way of making money.

Boots sells Ladycare Magnets that allegedly treat the symptoms of menopause through magnotherapy even though there is absolutely no evidence they work and plenty that they can't possibly.

A Boots spokesman notoriously said that Boots doesn’t sell homeopathic remedies because they work, they sell them because people like to buy them: "I have no evidence to suggest that [homeopathic remedies] are efficacious. It's about consumer choice and a large number of our customers think they work."

There are plenty of other products that don't or can't work - the beauty industry is full of them, for example.

There are two issues here. One is freedom of choice. The research recommends that the NHS does not spend money on glucosamine and chondroitin but if people want to buy a product, that's up to them. However, if they think they are buying one thing (a medically-proven treatment) and they're getting another (a placebo) then arguably they are being mis-sold. It could also be argued that it's up to all of us to inform ourselves about what we're buying. But checking out the fat content on the back of a pizza in the supermarket is not the same as reading small print on apparently medical products, checking out academic research or even, in some cases, understanding media reports of research. Most people don't have the time, the will or the ability to do it. They're much more likely to buy on the recommendation of someone they know and trust (it worked for me). What's more, there may well not be any small print to check out.

The second issue is the ethics of placebo, which has been much discussed. Does it matter if feeling better is not the same as being better? Pain is one of the conditions that placebos work on particularly well and osteoarthritis can be very painful. Medical treatments for long-term pain can have side-effects while glucosamine and chondroitin apparently don't. How many of us actually know how any of the prescription medicines we get from the doctor work? If I had a long-term condition that medicine couldn't cure but which could be managed, then I think I'd rather get my placebo from a doctor who has fully diagnosed my condition, assessed all available treatments and will continue to monitor my progress than be left to the mercies of advertising and anecdote.

This leaves patients in a dilemma. If they do research their condition and possible treatments and find out that the only treatments that may help are placebos, will they still work? In order to save the NHS money, would it be ethical for doctors to recommend patients buy specific over-the-counter treatments rather than giving prescriptions? This way, patients get medical care but the NHS doesn't foot the bill for placebos. But then there is the question of what happens to people on low incomes. One potentially discriminatory effect of the Bern researchers' proposal is that the benefits of placebo will be available only to people who can afford them. This is the status quo as GPs are currently being advised not to prescribe glucosamine, but if over-the-counter is the only way people can buy placebos, is this equitable?

The placebo debate is not going to be resolved any time soon but the fact that yet more products have been proven to have no real effect means that it's not a debate that can be ignored. In the meantime, the manufacturers continue to make billions. One aspect that can be dealt with more simply is regulating labelling; claims like 'Promotes Natural Cartilage Regeneration' should be removed as this is demonstrably not true unless they are using a meaning of 'promotes' unknown to any other English speaker.
Posted by TK at 13:17 2 comments:

One for all or all for one?

Do we relate more easily to individual people in need than to groups?

Jonah Lehrer suggests that we find it much easier to relate to individuals in need than to groups of people because of the 'identifiable victim effect'. He cites the Chilean miners as an example - a group of people who fail to interest most of us as much as a single famine victim.

Lehrer also mentions a paper which 'tested recent claims that analytical processing might undermine support for identified victims by suppressing emotional responses'. It found that ' Less-analytic processors donated more to a single identified victim than to requests describing statistical victims or a combination of both; more-analytic processors showed no differences.'

In other words, less analytical people are more likely to give to an individual or to a campaign using images of a single person.

While this may be true for some people in some instances, charitable giving appears to be much more complex - and more interesting - than this. It's true that charities know the value of showing a cute animal or big-eyed starving child with flies crawling on it (because animals are individuals too in this instance). But charitable responses to major disasters like the tsunami or the current situation in Pakistan appear to contradict the identifiable victim response. For example, the British people have given considerable and unexpected amounts to relief in Pakistan - does this make us more analytical than other nations? It could be said that people who give to large groups far away have a stronger emotional response or more empathy as it extends to more than one individual.

The type of victim is relevant too. For example, a homeless person on the street is an individual, sometimes familiar and living in the potential giver's neighbourhood. But for many passers-by, when they are begged at there's a judgmental/analytical process which happens. Is the beggar just going to spend the money on alcohol? Does s/he deserve our hard-earned money? Is s/he a helpless victim who had no part in their own downfall? Women begging on the street with babies are clearly trying to create an emotional response but some people may not respond to this, even wondering if it is really that woman's child, perhaps recalling some media story about begging rings and scams. Any individual doesn't do it for us, it must be the right individual.

The concept of the deserving poor comes into play and perhaps over-rides the individuality of the beggar and prevents identification; it's an idea that's been around since the 16th century. This is where sad puppies and starving children score - they are clearly innocent victims. But at some level, there is always an analytical process going on before we connect emotionally and decide whether we are being played and whether to act on generous feelings.

There's also media coverage. The Chilean miners are currently being ousted from the headlines by cricket scandals and footballers' private lives. What's more, the miners are alive and apparently in no immediate danger. There's no daily drama or death toll to tug our heart strings.

Time is a factor, too. A long-drawn out situation that appears insoluble is less attractive than a sudden, unforeseen natural disaster with shock value or something that appears to need a quick(ish) fix where it's easier to feel a difference is being made.

In addition, Lehrer says that we don't identify with statistics but I think that numbers do have an effect sometimes. Perhaps part of the problem is that the miners are neither one small child trapped down a well nor are there millions of them in imminent danger. There are too many of them and not enough.

It's true that millions of children around the world are daily at risk from preventable disease and hunger and yet people give money to the local donkey sanctuary because they saw a picture of a poorly donkey in the local paper but this is as much about marketing as generosity and empathy. Some research by Richard Wiseman found that the colour of a charity donation box and the wording on it affect how likely people are to give, for example. Using the word 'disaster' is good marketing, too.

There's possibly also a peer pressure effect. If everyone in your office is putting money into a collection tin, then resisting is going to be harder than if the tin is just in a shop or you get a mail shot at home. Telethons tap into something similar - look how much money everyone is giving, don't you want to be part of this virtuous group too? In such situations, what the collection is for becomes secondary, whether it's to sponsor a single child or for a major disaster.

For some people, charity is a religous duty, neither an emotional/empathic nor an analytical response.

There is a fair bit of research showing that women are more charitable than men, so gender is another factor (so are older people and Northerners in the UK).

One research paper looks at the gender difference in more detail. It calls the ability to identify or empathize with others 'the inclusion of others in the self'. It also looks at moral identity - the importance of being fair, kind, just, generous etc to self-identity. What it found was that men with stronger moral identity were more likely to give to individuals or to an in-group (local charities, for example) whereas women were more likely to give to an out-group (eg overseas charities) as their moral indentity increased. In other words, these women are responding to large groups more than men. Does this mean men are less analytical?

So it looks like charitable giving and relating to people in need isn't just about individuals versus groups but is much more complex - which is hardly surprising given that human instincts and motives for doing anything are complex. And just to confuse matters further, one of the biggest charities in the UK in terms of giving is the National Trust, which doesn't help humans at all.
Posted by TK at 21:47 No comments: