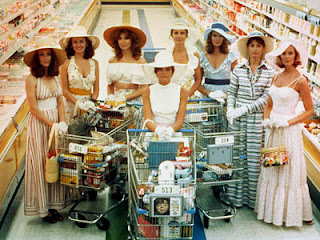 How Boots is trying to turn us all into Stepford Wives

Boots is selling a product called Kira Low Mood Relief which, it says, ‘helps relieve the symptoms of slightly low mood and mild anxiety’. The product is targeted at women – the advert says it is ‘inspired by women and their lives’ (more specifically, middle class, first world women).


What’s in Kira Low Mood Relief?
The active ingredient is St John’s Wort. There is some evidence that this is effective for mild depression although, as the NHS site points out, it has ‘potentially serious interactions that can occur with other commonly used medications’, for example the contraceptive pill, HRT, all depression medicines, blood thinning treatments, epilepsy treatments, HIV treatments and immunosuppressants. The active amount contained varies from product to product so research findings may not be relevant to any particular one.

There’s nothing strictly illegal here, Boots isn’t selling empty promises as it is with its collagen products (also for women) – as I wrote here.
But the contents are beside the point.

What is Low Mood?
The NHS web site describes low mood as including ‘sadness, an anxious feeling, worry, tiredness, low self-esteem, frustration and anger’. But Kira Low Mood Relief is aimed at slightly low mood. In other words feeling a little bit glum, grumpy or not quite as perky as you did when you were twenty.

In the olden days, it would have been described as a touch of anomie, ennui, melancholia, black bile, feeling lugubrious or phlegmatic.

As the NHS points out ‘Most people experience ups and downs in their life, and can feel unhappy, depressed, stressed or anxious during difficult times. This is a normal part of life. However, a low mood will tend to improve after a short time’.

Some people are naturally more Pollyanna than others. What’s more, sometimes the only sane response to adult life is to howl at the moon.

The Pursuit of Happiness
This is the crux of the matter. No one feels happy all the time. No one wakes up every day feeling like Julie Andrews singing The Hills Are Alive.

Boots is trying to medicalise being alive, being human. Or more specifically, being female. It’s telling you it’s your right and duty to feel happy as Larry all the time. If you don’t there’s something wrong with you and, for £15.99 a month, the magic pills can fix you.

The marketing makes Kira Low Mood Relief sound like soma, the State-produced comfort drug in Brave New World. Kira LMR is the pill for every ill that doesn’t really exist. It’s Boots’ way of trying to turn women into Stepford Wives, smiling vacantly as they buy their polenta. Because it really is for middle class women who want something that sounds ‘natural’. Thank god for Boots giving a name to that vague feeling that life should be better that I get now and then. It’s not just me, it’s a real thing with science words and I can take a pill for it. It’s not an existential crisis after all.

There is no automatic right to be happy all the time. Dis-ease is not a disease.

There’s even some evidence that feeling low sometimes can be useful.

Marketing works on creating discontentment or fear and providing the solution. This is just one product but there is an increasingly pervasive sense that it is our duty to ourselves to be happy, productive little workers, parents, lovers and shoppers. Unrealistic expectations lead to disappointment. If that disappointment can be given a name and a product to fix it, the shareholders are happy.

I really am feeling glum, what can I do?
Get over yourself. The NHS is more humane than me and offers some sensible solutions that include exercise, healthy diet, sleep, less alcohol and talking through problems.

In other words, do all the boring, sensible things you know you should be doing. And, if the symptoms are more serious or persistent, see the doctor. But there’s no money to be made in common sense advice. A cup of tea and a chat with your mates might help, so might a glass of wine, but Boots doesn’t have tea shops or a license to sell booze. Major Kira would most definitely not approve.
Posted by TK at 17:01 2 comments: