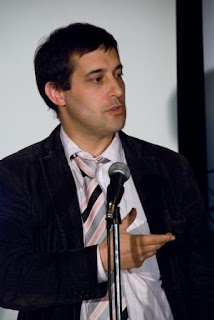 There are very few scientifically literate, evidence-based and openly secular MPs in parliament. Dr Evan Harris has been the LibDem MP for Oxford West and Abingdon since May 1997 and is standing again at this election. I've never voted LibDem but I do support him for his work on scientific research, medicine, free speech, equality and secularism. He backed Simon Singh in his libel case and has actively supported Skeptics in the Pub, a group I belong to - most recently in our 1023 homeopathy campaign. He is the LibDem spokesman for science and serves on Parliament's Human Rights Select Committee.
There have been boundary changes in his constituency and it would take only a 7% swing for him to be replaced by Nicola Blackwood, a fundamentalist Christian Tory.
She is a member of the Conservative Christian Fellowship. Her profile on their website says that her political activities and voluntary activity are 'both classically Conservative and classically Christian'. It continues: 'along with many Christians, she is concerned that the right to freedom of religion is being undermined without proper understanding of the potential consequences for faith groups or the wider community. In particular, she fears that the voice of Christians and people of other faiths on key issues of conscience is too readily dismissed in public debate'.
This is not the place to unpack those statements but the National Secular Society website has plenty of evidence for why she is so very wrong.
Perhaps sensing Evan's alleged vulnerability, the sharks have started circling. Several groups have attacked him, some with a closer regard for the truth than others.

Some Christians are playing dirty. There is rap sheet against him written by the Reverend Lynda Rose that has been widely distrubuted in his area, calling him 'one of the most outspoken secularists in Parliament' and bringing up the old Dr Death tag. Secularist is not a term of endearment here.

The leaflet points out with a condemning finger that he is in favour of liberalising the law on abortion, that he promotes 'contraversial' embryonic research and the legalisation of euthanasia. He is, they say, against faith schools and the right of adoption agencies to turn away gay couples. He is also in favour of compulsory sex education in primary schools. Oh, and he wants the pledge to God removed from the Scouts' oath.

In other words, he is threatening the very fabric of decent society.

While the pro-life, anti-choice Reverend Rose claims 'It is a purely factual leaflet', members of the scientific and skeptical community generally have a higher threshold of evidence than she appears to. The evidence-based Dr Harris has a different view too. He told the Oxford Mail: 'It is a pity that, instead of putting up a candidate to contest the election, an anonymous group (...) is distributing an inaccurate personal attack leaflet in this constituency (...) I am proud of my record of speaking out on medical ethical issues and of course no candidate will agree with everyone on some of these divisive issues but I have always been prepared to debate the issue with any group'.

Another group who prefer emotive smear campaigns to facts are the Animal Protection Party, and they are fielding a candidate. According to them, Evan is an 'aggressive secularist' in favour of 'attacking the brains of monkeys'. He is also 'the drug companies (sic) chief mouthpiece in parliament' where 'he uses his position to attack herbal remedies, vitamins and homeopathy as 'untested', while promoting animal tested prescription drugs'.
I'll just point out that the alt med industry is worth billions a year and leave it at that.

The APP also accuse him of advocating 'the use of hybrid human/animal 'Frankenstein' embryos for research'.

If you're going to play the mad scientist card, at least get the right mad scientist. It was not Frankenstein who made hybrids, it was Dr Moreau, as in The Island Of... Even if you haven't read HG Wells' book, there have been several film versions.

Christina Odone had a rather unimaginative go at him in the Telegraph too, and yes, she did call him Dr Death. His response was :

"How sad that she resorts to snide personal comments which she has publicly condemned in others. Why not just stick to the issues?

"On the issues, it is true that, in common with 80% of the country and a majority of Christians, Lib Dems support – on a free vote for MPs and peers – the legalisation of assisted dying for the suffering terminally ill of sound mind. This is very different from “euthanasia” which would include involuntary and non-voluntary euthanasia (non-consenting or where no capacity to consent) which we of course oppose.
"On abortion, there is no party policy. I support – as does 80% of the population and the Church of England – the right of women not to be forced to go through pregnancy and give birth against their will. Abortion, when it happens, should take place as early as possible and our current laws should be amended to make access to early abortion easier to prevent delays."

Attacks on him are nothing new. The Mail notoriously had a go back in 2007. But this is election time so the stakes are a bit higher than usual.

After the lies, some facts.

These are some things he has worked on:


If you should feel moved to, you can support him here.

UPDATE: Evan lost by 176 votes, which made George Pitcher of the Telegraph very happy. A hung Parliament may not last long, and there is talk that Evan will stand again.