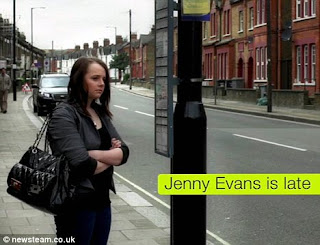 Marie Stopes International have launched a new campaign called Are You Late?, part of which is an advert that will be shown on Channel 4 at 10.10pm on 24 May 2010 and then throughout June. This will be the first ever advert for pregnancy and abortion advisory services on TV.

The advert and the campaign were set up after research showed that only 42% of adults in the UK know where to get specialist advice other than from their GP.
The campaign aims to give information about services and also to encourage people to discuss abortion more openly. One in three women have one. In 2008, 215,975 were performed in the UK and in 2009, Marie Stopes International performed about one in three of all abortions in England and Wales.

I wrote a submission to BCAP for the National Secular Society about the advertising of condoms and advisory services a while ago and also wrote about the Christian Medical Forum's response to the consultation - they were one of the religious groups who tried to stop such adverts happening.
Not surprisingly, pro-life organisations are against the advert. The Society For The Protection of the Unborn Child (SPUC) put out a press release saying: 'Allowing abortion to be advertised on TV will lead to more unborn babies being killed and to more women and girls suffering the after-effects of abortion. Abortions ads will trivialise abortion. It is an insult to the hundreds of women hurt by abortion every day. Such ads are offensive and will mislead viewers about the reality of abortion'.

Emotive statements backed up by no evidence whatsoever.

Firstly, the slipperly slope argument is a favourite of groups who want to deny women control over their own lives and sexual health. It's similar to the argument that, if you give young people sex education, it will encourage them to go out and have sex. Or the argument put forward by the Catholic Church in Scotland that if young women are given the potentially life-saving HPV vaccine, this will make them promiscuous. SPUC reason that abortion will be trivialized, presumably meaning that women will start to see it as a form of contraception, which is another old argument, backed up by no evidence

They give no details about how women are hurt by abortion. As to suffering after-effects, research has found that 'the time of greatest distress is likely to be before the abortion. While some women may experience sensations of regret, sadness and guilt after an abortion, the overwhelming responses are relief and happiness'. Pro-life groups may claim to be concerned for women but they always put the tiny ball of cells first, even when a woman's life and well-being is at risk.

Then the press release tries another tactic. It says that 'Abortion is in English law a criminal offence'.

I rang their press officer who quoted me the Offences Against the Person Act, Section 58.

Section 58 replaces section 6 of the Offenses Against the Person Act 1837 and says: Abortion by unlawfully administering any poison or noxious thing is an offence.

However, SPUC are forgetting or ignoring or wilfully misrepresenting one thing - the Abortion Act 1967. This is 'An Act to amend and clarify the law relating to termination of pregnancy by registered medical practitioners'.

In summary, the Act states that a person is not guilty of an offence under the law as long as certain conditions are met, mostly to do with who authorizes and carries out the termination, and where. An abortion carried out by an approved practitioner in a hospital or approved clinic is not against the law. Moreover, 'No offence under the Infant Life (Preservation) Act 1929 shall be committed by a registered medical practitioner who terminates a pregnancy in accordance with the provisions of this Act'.

So when SPUC say that 'Abortion is in English law a criminal offence', they are talking about a law that is 43 years out of date and which is based on a law from nearly 100 years ago. Getting emotive about abortion is par for the course with them and similar groups. But they are also ignoring a law that doesn't suit their prejudices and wilfully misleading the public, not just in a press release that has limited circulation, but also in the media. As a lawyer I know put it, they are "irresponsibly misrepresenting the law". It might be termed a sin of omission. SPUC is claiming that the advert 'will mislead viewers about the reality of abortion' but that is exactly what they are doing.

Dr Ed Mitchell, a GP and member of the Secular Medical Forum, commented: 'Abortion up to 24 weeks pregnancy is legal in English law. Indeed, abortions are paid for by the NHS, who offer counselling to help women make the right choice. The SPUC's statement that such a service is illegal is grotesque, a piece of misinformation affecting women at a vulnerable stage of their lives just when they need unbiased information and help'.

Indeed, if they are right, then thousands of doctors, nurses and healthcare professionals are criminals, and the NHS has institutionalized law-breaking.

It's becoming standard practice for groups or individuals to ignore laws that don't suit them, or to think they are exempt from them, most often because of religious convictions.

There have been several recent examples of attempts to flout the Equality Law relating to non-discrimination against homosexuals ( the Christian B&B owner refusing gay guests, Gary McFarlane the Relate councillor refusing to work with gay couples, Lillian Ladele refusing to conduct civil partnerships for example). And in many cases, when the law finds against them, they claim persecution.

As Lord Justice Laws said of the McFarlane case: "We do not live in a society where all the people share uniform religious beliefs. The precepts of any one religion - any belief system - cannot, by force of their religious origins, sound any louder in the general law than the precepts of any other. If they did, those out in the cold would be less than citizens, and our constitution would be on the way to a theocracy, which is of necessity autocratic. (...) The conferment of any legal protection of preference upon a particular substantive moral position on the ground only that it is espoused by the adherents of a particular faith, however long its tradition, however long its culture, is deeply unprincipled."

While not everyone who opposes abortion does so on religious grounds, the vast majority of pro-lifers are religious.

SPUC and other pro-life groups do not represent the majority of the population, They do not even represent the majority of religious people in this country. A YouGov poll in November 2007 showed that 63% of people agreed/ strongly agreed that 'it should be legal for a woman to have an abortion when she has an unwanted pregnancy'. What's more, 58% of self-identified Protestants and 43% of Catholics agreed/strongly agreed with this statement too. The Marie Stopes survey showed that 76% of adults supported showing such adverts at appropriate times.

SPUC and their ilk are also confusing being pro-choice with being pro-abortion. As a spokesman for Marie Stopes said: "We are empowering women to make choices. We believe that women have the right to choose the destiny of their bodies and their lives and we are always client-led. If a woman is clear that she wants an abortion, she is a grown woman who has made up her own mind and we support that. If she is not sure, we will counsel her on all the options, including adoption.

"SPUC's agenda is that they do not want women to have the right to an abortion in any circumstances; they always put the foetus above the woman's rights." As an illustration of what would happen if they got their way, he added: " In parts of the world where abortion is illegal, around 70,000 women die every year from backstreet abortions."

SPUC are trying to stop the advert being shown.

Complaints about the ad, mostly by religious groups and individuals, have been rejected by the ASA.
Posted by TK at 11:24

Labels: Abortion, Marie Stopes, Society for the Protection of the Unborn Child