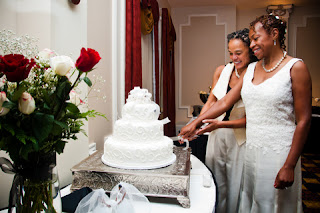 The Government has now launched its consultation on equal civil marriage in England and Wales (Scotland consults separately).

So religious opponents won't have to worry about lesbians and gays tainting their aisles (although, on a note of pedantry, no one goes up the aisle, it's the nave). Of course, this isn't their only objection but a lot of the anti propaganda has skipped over the fact that the consultation is about civil, not religious, marriage in order to whip up a lather of indignation.

It points out that there is no legal definition of religious and civil marriage. Marriage is defined according to where it can take place rather than being either specifically religious or civil (Marriage Act 1949). There will not be two separate legal regimes for civil and religious marriages.

The change to the law would also benefit trans people. At the moment, couples where one person changes gender cannot stay married because same-sex couples cannot legally be married. Currently, someone can legally change gender with a full Gender Recognition Certificate but not if they are in a marriage or civil partnership. They have to end the legal relationship to get a certificate and then re-marry, which can affect pensions and benefits. It's interesting that, among all the religious objections to equal marriage, not one has mentioned this aspect.

Other changes include the fact that these civil marriages will become subject to some of the same rules for divorce as other marriages – adultery and non-consummation, for example. The consultation says case law may need to develop, over time, a definition as to what constitutes same-sex consummation and same-sex adultery. This points up the rather archaic and patriarchal focus on penis-vagina penetration as the definition of a full marriage and of adultery - and the excuse used by some men that blow jobs don't count as infidelity.

The first question in the consultation is: Do you agree or disagree with enabling all couples, regardless of their gender, to have a civil marriage ceremony?

Given that the Government says it is committed to introducing same-sex civil marriage, are they now wavering or is this question a sop to the religious groups who have campaigned so vehemently against changing the law, as I wrote about here? That said, they do only get 200 words, so there's no room for any sermons, just a quick summary of how this is the end of civilization as we know it, a crime against nature and the road to hell.

Religious opponents will no doubt mobilize the masses to respond to the consulation. It will be interesting to see how the Government spins the balance of responses although, as I wrote last week, human rights are not a number game.

It is an important freedom of expression issue that people should be able to express their opinions and beliefs within the law – which means we can expect a lot more like this from Cardinal O’Brien, the Coalition For Marriage and the like as well as leaders of other religions jumping on the bandwagon.

The latest attack comes from Vince Nichols, Head of the Catholic Church in England and Wales, who told Jeremy Paxman that gay relationships are 'profound friendships', not marriage. He also said that although marriage is for a couple to have children, lesbians who have children via a donor don't count because they are not both the natural parents of the child. Paxman didn't ask him what that means for straight couples who adopt or use a donor.

Same-sex couples will still be able to have a civil partnership if they prefer or, if they already have one, they will be able to 'upgrade' to a civil marriage - which does make marriage sound like a mobile phone.

The consultation is here and runs until 14 June. The National Secular Society will be responding to it and will write guidelines for anyone who needs them to write their own response.

As so many religious opponents will be responding, it's important for individuals who support it to do it too and not to rely on Cameron keeping his word that he is determined to make equal marriage happen.
Posted by TK at 13:58