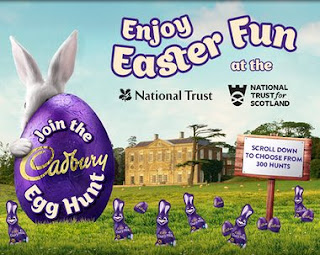 As if Theresa May didn’t have enough to deceive the British public about at the moment, now she decides to wade into the Great Easter Egg Debate. This is basically the Winterval, ’they’re cancelling Christmas’ non-story with added chocolate.

Cadbury’s and the National Trust have been running a joint egg hunt for 10 years. This year they’re calling it the Cadbury's Great British Egg Hunt instead of the Easter Egg Trail.

According to May, dropping the Easter is ‘ridiculous’. According to Archbishop Sentamu, this is ‘spitting on the grave’ of the company founder, John Cadbury, who was a Quaker.

May said: "I think the stance they have taken is absolutely ridiculous. I don't know what they are thinking about frankly. Easter's very important... It's a very important festival for the Christian faith for millions across the world." She also reminds us that she’s a vicar’s daughter.

Firstly, Cadbury is not dropping Easter from its promotions. As a spokesman point out: "A casual glance at our website will see dozens of references to Easter throughout." A ten second look at their website shows ‘Enjoy Easter fun at the National Trust’. Yes, the E Word is right there.  They also have a section called Easter Products  that says ‘Our eggstensive range is packed with perfect treats for the Easter season!’. Yes, it’s a terrible pun, but, again, the E Word is right there.

Secondly, dear Archbishop, stop being a drama queen for one minute and you may remember that Quakers don’t even celebrate Easter because they believe every day is holy.

Thirdly, both the Archbishop and the vicar’s daughter seem to have forgotten that there is nothing in Christian doctrine about the mass consumption of poor quality chocolate at Easter, whether it is shaped like an egg or a rabbit. These are wholly pagan relics. I wrote about the pagan originsof Easter here .

Fourthly, calling it the Great British Egg Hunt should make all the Brexiteers happy. We’ll have none of that Middle Eastern religion that was imposed on traditional British beliefs around 1500 years ago. Keep Britain’s Spring Festival British.

Fifthly, if Easter is as important as the two of them are trying to make out, how come only about 2% of people bother going to Church to celebrate what is the fundamental basis of Christianity?  And that’s according the Church of England’s own statistics.

All of those armchair Christians really should stop their advance towards diabetes for an hour and go to their nearest church – if they even know where it is.  They may be able to sing some carols but how many Easter hymns do they know? How many gave something up for Lent? It’s not as if Cadbury and the National Trust are barricading church doors to keep people out.

Sixthly, the real story here is that Brexit could mean more expensive or smaller chocolate bars. Cadbury’s have already reduced a pack of six Creme Eggs to five with only a slight decrease in the price. A spokesman for thecompany has said that it may well have to pass on higher costs to customers by raising prices or selling smaller products for the same price. And it’s not even a British company any more, it’s owned by US company Mondelēz International. I suspect the ghost of Mr Cadbury would be far more bothered about that.


Cadbury’s are probably far less worried about what Theresa May thinks than about the fact that six out of ten of our favourite chocolate products are made by their rival Mars, including the top slot, which is taken by Maltesers.

Finally, a vicar’s daughter and an Archbishop really should know that it’s a sin to tell a lie. They won’t be getting any eggs this year because the Easter Bunny knows if you’ve been naughty or nice. Santa sold the Bunny his list – customer data sharing gets everywhere. 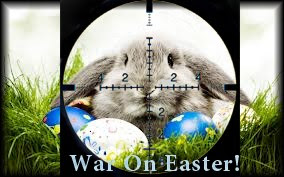 It looks like Cadbury's and The National Trust are avoiding the wrath of May and the Archbish this year by plastering the word Easter all over their joint egg hunt site.

But this isn't enough for some people.  Yes, the War on Easter brigade are back. The Sun has come up with the shock horror headline that nine in ten eggs won't have the word 'Easter' on them. One of the people they spoke to said 'Eggs signify  Jesus is risen and help tell the story. Why  not put Easter on the front of eggs?' Kind of missing the point there. Eggs, as we know, predate Christianity as part of Spring celebrations across many cultures.

If they don't like the eggs, perhaps they'd be happier with this: 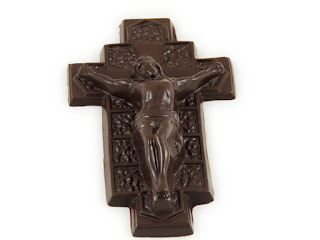 It's so much easier to whine about eggs than to deal with the fact that so few people go to Church on Easter Sunday even though it is the core festival of this religion - not Christmas. Only 1.3 million attended in 2015 according to the Church of England's own data. That's only 2.3% of the population (of England - the Churches of Wales and Scotland have separate data). Too busy stuffing themselves with chocolate, probably.

I'm sticking to hot cross buns. After all, the best part of any religion is its carbs. 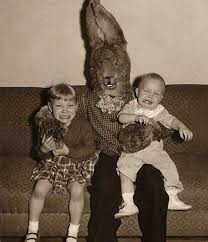