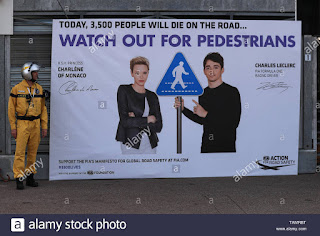 It was one of those Hang on a minute moments.

Action for Safety sounds like a good idea, using celebrities to promote safer driving. The poster campaign features slogans about not driving while tired, looking out for pedestrians and so on. Celebrities include sports people and minor European royals.

That seemed like a lot so I looked it up.

According to the latest government figures for the year ending June 2018, around 1770 people died on UK roads, about 4.85 a day. That’s quite a lot fewer.

Who is behind this campaign?

The organisation behind it is FIA (Fédération Internationale de l'Automobile), whose mission is ‘to bring coherent governance and safety to motor sport’. They also aim to ‘ensure that safe, affordable and clean systems of transport are available to all. The promotion of safe and sustainable forms of mobility has in turn led the FIA to commit to global sustainability initiatives and also to found its own major response to road safety concerns, FIA Action for Road Safety. This worldwide campaign, in support of the UN’s Decade of Action for Road Safety, aims to reduce fatalities on the roads by five million before 2020.’

All very honourable aims. But where do the stats come from? According to their fact sheet ‘Road crashes kill 1.3 million people every year’.

The source of this statistic is the World Health Organisation. Their site says that 1.25 million are estimated to have died in 2013 globally in road deaths.


So the FIA stats are not that far off. But the posters are very misleading, nowhere on them does it says these are global figures. They may be going for shock tactics to make people drive more carefully but is this a legitimate tactic? Is it ethical to be so misleading? It’s certainly unprofessional and amateurish.

If that was the UK figure it would be truly shocking but on a global scale is that significant? How does it compare with other causes of death?

According to the WHO, road injuries came eighth on the list of global killers in 2016, lagging a long way behind heart disease and stroke.

Three quarters of victims were men and boys, which would explain the prevalence of footballers and racing drivers on the posters as these are traditionally assumed to be male heroes and role models (but doesn’t explain why a princess of Monaco features…).

The distribution of deaths isn’t even globally either; some countries have much higher per capita rates than others. The worse death rates are in several African countries and Thailand. The UK has one of the lowest rates (and falling) while Monaco has the lowest of all (which might explain the princess on the poster).


That still makes them a pretty serious cause of death and a worthy campaign subject. But making the stats relevant for each country would make the campaign more relevant. Nearly five people a day every day is still too many.

The last part of the stated mission is 'This worldwide campaign, in support of the UN’s Decade of Action for Road Safety, aims to reduce fatalities on the roads by five million before 2020'. That's half a million out of 1.3 million a year for the decade of the campaign. Is that realistic in any way?

Although this is just a small example, it’s a useful skeptical reminder that without context statistics are meaningless. If even the good guys are misusing stats then it’s even harder to know who to trust, who to take seriously and who to dismiss.

So yes, drive carefully and soberly and wide awake but keep the same attitude towards any stats you encounter along the way. 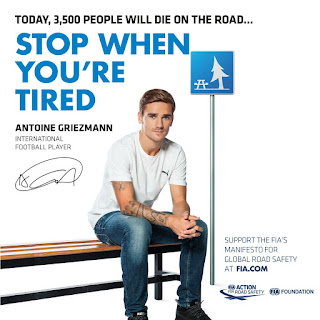