The Little Flower versus the King of Pop 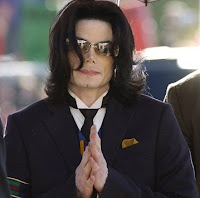 Two tours hit London this autumn. From 16 September to 16 October, St Therese of Lisieux will be in England and Wales as part of a world tour that has so far taken her to nearly 40 countries. Also this autumn, the Michael Jackson memorabilia tour comes to the O2.
To be more exact, some of Therese's bones will be coming in a sealed casket while the rest of her stays at home in Lisieux. She was a Carmelite nun who entered a convent in northern France at the age of 15 and died of TB at 24 in 1897. Her fame was initially founded on her autobiography, The Story of a Soul. She was known as the Little Flower and as the Angel of the Trenches in the Great War. She reaches London on October 12.
The hype is building about both tours. When Cardinal Basil Hume was Head of the Catholic Church in England and Wales, he blocked Therese coming here, so anticipation has had years to build. She has now been invited by Cardinal Cormac Murphy-O'Connor, current Head of the Church. Jackson's gigs at the O2 were cancelled when he died, so the fans need something to make up for the loss of his presence among them. Both tours are being sold as a way to pay respect, to remember and commune.
Pilgrimages to see relics are an old money-maker. As early as the second century AD, the relics of St Polycarp (66-155) were being venerated. In the Middle Ages, relics were big business, which often led to forgeries (the Shroud of Turin, for example). Believing Therese is even in the casket could be seen as an act of faith in itself.
There are three classes of relics:
Therese's relics are first class while MJ's are second and third class. The faithful will be allowed to touch and kiss the casket containing the bits of Therese. In fact, so will the unfaithful as Bishop McMahon of Nottingham, one of the tour directors, has said: "People of all faiths and none will be most welcome". It is doubtful that any kissing of Jackson's relics will be permitted.
One requisite of becoming sanctified is post-mortem miracles that occur either through the intervention of the saint or through exposure to the relics. So far, no miracles have been claimed for MJ although there have been many claimed sightings of his ghost, so he is already getting in on the supernatural act. 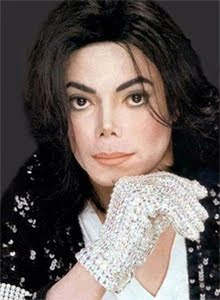 Seeing the remains of Therese is free as the tour is funded by donations while seeing MJ's accessories, including, it is said, the famous white glove, will not be. Merchandise will be available on both tours and huge crowds are expected.
Jackson has a body of work for his fans to remember him by. Therese wrote plays and poetry as well as the autobiography that has been translated into 50 languages. There have also been biopics of her life. Unusually for a nineteenth century nun, she was photographed (both alive and dead), which has helped with building and marketing her celeb status; images give fans something more personal to relate to than just a casket of remains or a statue. Therese has been a saint since 1925 and her appeal shows no sign of flagging. It will be interesting to see whether Jackson's following outlives the current generation of fans. 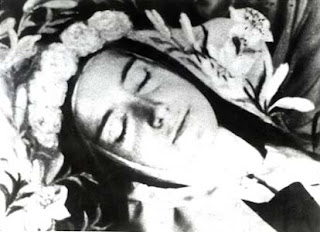 It's a human tendency to value objects belonging to dead people, to keep mementos as a way of sustaining memories and maintaining a connection. But Therese and Jackson were not family members or friends of their fans. Both are the object of parasocial relationships. These are one-sided relationships between a celebrity and civilians. It might be argued that Therese has a supernatural two-way relationship with the faithful but, for non-believers, her adulation is little different from his. In both cases, the upcoming tours will be a chance for fans to be near the adored one, to absorb something of their essence and to feed the relationship which, being one-sided, is not affected by death.
A relationship with a dead celeb is better in some ways because the dead don't disappoint. You can project anything you like onto a dead person, have any kind of relationship with them, and the fantasy will never be contradicted by reality. In hard or uncertain times, a relationship with the dead offers comfort, reliability and consistency.
This relationship becomes part of the fan's identity - in some cases, not a healthy part, replacing real relationships, skewing the fan's connection with the real world and making them vulnerable to exploitation. Show your love by spending your money (making an offering or a sacrifice). There can also be a sense of solidarity with other fans, a global community for people otherwise disconnected. Both Jackson and Therese have a huge global fanbase. Therese has the edge because membership of her fan club comes with divine approval.

Therese's parents Louis and Zelie Martin were beatified last year, the first step on the road to sainthood. She had sisters who were also nuns although none of them has yet joined the family act.
It will be interesting to see who pulls the bigger crowd this autumn. Therese's tour dates reportedly include Wormwood Scrubs. There is also a tribute concert for Jackson in Vienna on September 26 with nearly 85,000 tickets selling for up to £430. No performers have yet been announced, so buying a ticket could be seen as an act of faith. When Therese toured Ireland, an estimated two million turned out to see her. Around 800,000 people a year visit Lisieux. By that standard, 85,000 makes Jackson just a beginner.