Debenhams has launched Peachy Body Pants, the 'cellulite-busting pants'. For any readers who are not aware of it, cellulite is The Great Shame that every woman must fear and fight with all her might. Certain magazines are full of pictures of celeb cellulite, also known as orange peel skin, for women to either gloat over (if they have less) or feel comforted by (if they have lots).
Not only do these pants help fight The Great Shame, they also 'contain a patented weave knit system to stimulate the skin and massage the active ingredients of peaches (to moisturize), green tea (as an antioxidant) and coffee beans (to eliminate water) into the problem areas of the body'. Looking at the picture, they also appear to have a bit of a bum bra built in. Which is nice.

As if this weren't enough, the pants are made of Polyamide Meryl Skinlife, to help the process. According to research done for PeachyPink by Dr Tamura of Tokushima University in Japan, in collaboration with the Technology Research Institute, if you wear the pants eight hours a day for 21 days, you will lose between one and three inches. That's just enough time to look lovely for Christmas if you buy them now.
I asked Debenhams if I could see this research but they didn't have it. So they must be writing their press release from a version of the findings sent them by PeachyPink. I'd like to know what the placebo group wore, for starters. Pants with no green tea in? And how they randomized the test so the subjects didn't know if they were wearing the real pants or the placebo. Or maybe they wore no pants at all.
The press release explains how the pants work. The combination of ingredients 'warms the body, increasing the circulation of the blood and helping to prevent and break down fatty deposits and retained fluids. Toxins are flushed away, leaving waist, hips, stomach, rear and thighs resulting in a slimmer, toned and moisturized figure'.
Oh dear. Where to start? There is so much to say about all of these claims, but let's just look at a few of them.
Polyamide Meryl Skinlife (whose acronym is the not very attractive PMS) 'accumulates and transfers moisture to the surface of the filaments [which] allows it to easily absorb and transport perspiration.' It's also 'the first bacteriostatic microfibre' according to a specialist textile website.
So PMS pants help prevent a nasty sweaty crotch full of tiny living things, which is a blessing if you're going to be wearing them eight hours a day for 21 days. You really don't want festive thrush.
The press release includes helpful pictures to show how the pants work. 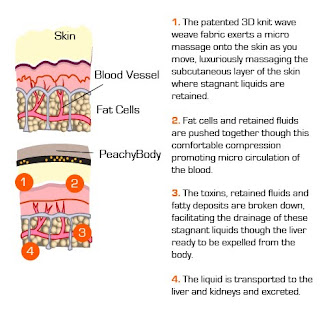 Now for the bad news. Nothing gets rid of cellulite. There is very little scientific evidence that any product even makes a dent in it. The best way to deal with it is never ever to turn your back on anyone while naked and keep the lights off at all times. Or just ignore all the insidious propaganda that makes you feel bad about your body to sell you stuff and buy a cake.

As to the peach moisturizer - how many washes will that survive?

Green tea antioxidant. Sigh. No matter how many articles like this one and this one state that antioxidants have not been found to do anything at all, products still include them as a magic ingredient. I'm not sure how these antioxidants would be absorbed but presumably they prevent your bum from ageing.
Next up are coffee beans to eliminate water. Which is where the PMS fibres come in, I guess, although the press release doesn't say where this water will come out. Coffee beans have been shown to help reduce hypertension but I don't think the subjects in the proper scientific tests were administered the extract through their lady parts.

Then there is the detox claim. Sense about Science say that 'Detox has no meaning outside of the clinical treatment for drug addiction or poisoning'. You have this thing called a liver that gets rid of anything your body doesn't need. Isn't nature wonderful? No, it evidently needs all the help it can get. Hoorah for the pants that promote the 'drainage of stagnant liquids', toxins and fatty deposits, packing them off to the liver and kidneys. Otherwise they might have ended up in your brain.
Oh, and they also give you a micro-massage. How thoughtful.

The pants are presumably an attempt to capture some of the market that John Lewis attracted earlier this year with their fetchingly named Scala Bio-Fir kickers embedded with bio-crystals which allegedly sold 25,000 pairs a month. Let's not even get into the bio-crystals or we'll be here until Christmas.

PeachyBody Pants cost £25 or £30 for the high-waist version and come in black or 'nude'. Oh, and they come as leggings, too. How many pairs would you need if you're going to wear them for 21 days straight?

Tip to men: despite Debenhams calling the pants 'the must-have stocking-filler this Christmas party season', don't buy them for your ladyfriend or you're likely to get asked a lot of very unfestive questions along the lines of 'so you think I'm fat?' and there won't be much joy in your Christmas stocking.

Not that many men would be tempted by them. Just how unsexy are they? If I put a lot of time and effort into seducing a lovely lady only to find that lot under her party frock, I think I might report her to Trading Standards for misleading advertising on the packaging as the cellulite reveals itself and the stagnant liquids seep out through the PMS. Just because they are black does not make them sexy, not even with high heels. And the so-called 'nude' version is inevitably going to be some sort of pinky beige colour that bears no ressemblance to any living skin.

If any woman revealed to me that she was wearing detox or antioxidant pants, my laughter would probably put paid to any further action.

The nice lady at Debenhams was very keen to send me a sample by courier and they were waiting for me when I got home. They look sort of crinkly, like a deflated black balloon and they smell funny. Not peachy, just sort of sweet like cheap air freshener. If anyone would like them, let me know.

In the interests of science, I have now tried them on. I measured waist, hips and thighs before and after. The result was that I instantly lost 0.75 inches off my thighs but my hips increased by 0.5 inches because the bum bra shoved everything up and made it stick out more. My waist increased by 0.75 inches. They looked very unsexy indeed. My flatmate laughed.