Blessed are the cake bakers 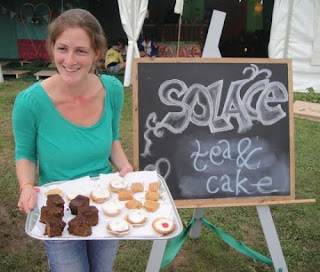 The Solace tent at the Isle of Wight festival offers free cake. It's run by volunteers from churches who also offer to wash feet and say prayers.

“It’s a feast of hope and a model for other churches to follow,” said Roy Crowne, head of the nationwide initiative HOPE, which encourages churches to work together on projects like this one. “We’ll be following the Solace team and their adventures, because we want to learn from their example.”

It's FREE CAKE. I would let pretty much anyone wash my feet and pray over me for a slice of good homemade cake. Especially at a festival if I'd been chemically interfered with. Even if I was in such a state I couldn't remember my own name, my cake radar would still be fully functional.

The only example this is setting is that people like cake. It's not a feast of hope, it's a feast of cake.

According to the Solace Facebook page, they were praying for good weather this weekend. They should have spent more time praying and less time baking. I hope the cake didn't get wet.

There will also be a Solace stall at Bestival.
Posted by TK at 17:59 2 comments:

At a two-day international conference on HIV/AIDS in Rome last weekend the Vatican reiterated its stance on condom use – never, in any circumstances.

The Catholic Church’s strategy is a combination of caring for infected people and so-called education of consciences, claiming to put human dignity at the centre of its AIDS policies. It is one of the largest providers of HIV/AIDS care in the world but its unmoving doctrine on condom use is often accused of causing millions of needless deaths and the related suffering they entail. They won't help you avoid getting infected but they will look after you when you are. Which is nice.

The conference was organised by the Pontifical Council for Health Care Workers. One of its aims was to address the confusion over the Pope’s statement last year that condom use might be justified in some circumstances to prevent disease transmission. It was made more than clear that’s not what he meant. Absolutely not. Ever. As if they hadn't already covered that one.

Just before the conference, Vatican moral theologian Father Perez-Soba provided a trailer when he published an article saying that condoms make the AIDS epidemic worse because they encourage immoral behaviour. According to him, using a condom shows a lack of respect for the other person.

His advice for married partners where one of them is infected is simple – stop having sex. Ever again. He also wrote that ‘a sexual act carried out with a condom cannot be considered a fully conjugal act.’

Monsignor Suaudeau of the Pontifical Academy for Life backed him up by saying ‘Chastity is joyous’. The Academy's remit is: 'to pay honor to pure science, wherever it is found, and to assure its freedom and to promote its research, which constitute the indispensable basis for progress in science'. Scientists of the world, look away.

The position of the joint United Nations programme on HIV/AIDS (UNAIDS) is that the correct and consistent use of condoms is an integral and essential part of HIV prevention, along with education, limiting sexual partners and marital fidelity.

Not everyone has those options. Much effort has gone into educating sex workers – both male and female - around the world into using condoms. Elizabeth Pisano's excellent book The Wisdom of Whores looks at initiatives with sex workers. It also shows just how unrealistic Vatican diktats about sex are in pretty much every way.

It’s hard to see how human dignity can be respected by preaching celibacy (something the Catholic Church itself has proven to be rather weak on) while ignoring human nature and the realities of life. The Vatican’s unchanging position is both unrealistic and inhumane. But to expect anything else from them is also unrealistic. The only real question is why they bothered having the conference.
Posted by TK at 17:04 No comments: