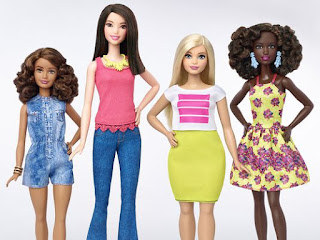 Barbie now comes in three different shapes: tall, petite and curvy – and her new incarnations have sparked some debate. There have been complaints that curvy Barbie is still thinner than the average woman in the UK and the US. But is this a bad thing?

In that year, 67% of men and 57% of women were overweight or obese. Overweight and obesity are defined as ‘abnormal or excessive fat accumulation that may impair health’. Being overweight/obese is associated with an increased risk for some common causes of disease and death including diabetes, cardiovascular disease and some cancers.

The cost to the NHS of obesity and obesity-related disease was £2.3 billion in 2007 and is projected to be £7.1 billion by 2050 (assuming we still have an NHS by then). Costs attributed to overweight and obesity taken together are £4.2bn in 2007, projected to be £9.7bn in 2050. This compares with the current cost of smoking-related disease at approximately £2bn (and smokers are heavily taxed).

For some time, Body Mass Index (BMI) has been used as an indicator of obesity but it’s a pretty blunt instrument as it doesn’t distinguish between fat and muscle or take account of how the fat is distributed (fat in the core area or around the organs is worse for health than fat lower down the body, for example). Waist to hip ratio or waist measurement are now considered more accurate with a waist measurement over 102cm (40.2in) in men and 88cm (34.6in) in women taken as the threshold for health concerns. This metric still works best for people of average height and Western ethnicity though.

By these measurements, Curvy Barbie is clearly thinner than the average UK woman. This may not be a bad thing.

Original skinny Barbie has taken a lot of flak over the years for causing girls and young women to be unhappy with their body shape. For example, research done in 2006 found that girls aged between 5.5 years and 7.5 years old were less satisfied with their own body shape after reading a book with pictures of original Barbie. The research was done by Helga Dittmar of Sussex University who found that "The girls said they wanted a thinner body shape than they had. They had lower body-esteems after seeing pictures of Barbie. If we show an effect with a single exposure study it stands to reason that the impact increases as time moves on."

The media is full of images of very thin people that cause a lot of pressure, misery and body dysmorphia in women (and of course, men too). Diet books and products are huge earners. Barbie is just a tiny contributor but even with falling sales, she is a presence in the lives of many young people.

Fat shaming is hateful behaviour. There was a recent case of people handing cards to overweight women on the Tube in London to humiliate them, reducing women (yet again) to just a body to be judged.

Women are of course used to being judged by their appearance – and found wanting both by companies trying to sell products and by society in general. But should Barbie reflect the average woman? If she had a scaled-down version of the average waist and hip size would this make young women feel better about themselves or would it normalise obesity? Even while acknowledging the flaws of BMI, the Health Survey of England found that ‘there was a significant discrepancy between participants’ own assessment and their BMI category, which was greater among men than women. This lends support to the idea that a high prevalence of overweight and obesity in the population has led to a greater bodyweight/size becoming the norm’.

There’s a fine line to be walked here. While it is in no way acceptable to judge anyone by their size, promoting healthy body shape through a balanced diet and exercise can only be a good thing. The message is too complex for some: obesity is not good for health but if fat is bad, it’s too easy to jump to the assumption that fat people are bad/weak/stupid. It’s important that children understand the distinction. There’s also a class/income element to obesity as people in lower income groups are more prevalent in overweight groups.

Children have little or no control over what they eat so education is essential to ensure that, as soon as they have a choice, they make it a healthy one. The recent proposal to tax sugary drinks has its heart in the right place but even if campaigners succeed in getting it done, it won’t work without education and healthy bodies as role models.

Prevention is easier than cure. It’s hard to lose weight and exercise regularly. Evolution has geared us to seek out fats and sugars as they were once in short supply. Now they’re everywhere. The time of food scarcity when a fat baby was thought to be a healthy baby is long gone.

Children don’t know what dress size Curvy Barbie takes, they don’t know that it’s less than the average, they just see that she’s not skinny as a stick. Yes, she is just a doll and is only a tiny part of the way children are influenced. But if Curvy Barbie helps just a little bit to stop children feeling as bad about themselves while at the same time it normalises a healthier shape, that could be a step in the right direction.

Perhaps toy maker Mattel is being more realistic about the shape we’re in or perhaps this is an attempt to boost profits, which are reported to have fallen by 59% with a 14% drop in sales of Barbie.