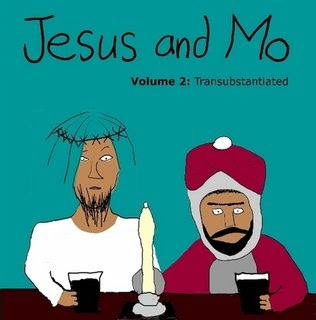 The blasphemy law was abolished in March 2008 but is creeping back through claims of Islamophobia by both Islamic extremists and the Left.

The latest example of a growing attack on freedom of expression happened at the London School of Economics this week.

The LSE Students Union (LSESU) told the group that unless it removed the cartoon from its Facebook page, it could be expelled from the Union because ‘posting these cartoons was in breach of Students’ Union policy on inclusion’ and that they ‘strongly condemn and stand against any form of racism and discrimination on campus’.

In a statement on behalf of LSE ASH, its President Chris Moos said:
‘There are no reasonable grounds for the LSESU’s instruction because we are in no way violating their policies or byelaws. The cartoons on our Facebook page criticise religion in a satirical way and we totally reject any claim that their publications could constitute any sort of harassment or intimidation of Muslims or Christians.

‘That there was no deliberate intention to offend is illustrated by the fact that the cartoons were posted only on the LSESU ASH page and not in other spaces. But even if some people are offended, offence is not a sufficient reason for certain artistic and satirical forms of expression to be prohibited. A university should hold no idea sacred and be open to the critiquing of all ideas and ideologies'.

An Emergency General Meeting was held at LSE on Thursday. The Union noted ‘That Islamophobia is a form of anti-Islamic racism’. The motion passed by 339 votes to 179. The voting bloc of 339 contained people from Far Left groups as well as Muslims. The Union resolved:

- To define Islamophobia as “a form of racism expressed through the hatred or fear of Islam, Muslims, or Islamic culture, and the stereotyping, demonisation or harassment of Muslims, including but not limited to portraying Muslims as barbarians or terrorists, or attacking the Qur’an as a manual of hatred”,

- To take a firm stance against all Islamophobic incidents at LSE and conduct internal investigations if and when they occur.

You can listen to the debate at the EGM here.

A spokesperson from the National Federation of Atheist Humanist and Secular Student Societies said: ‘This is not the first time that an AHS member has been caught up in a row over published material. In 2008, Warwick Atheists caused controversy with a poster showing religious symbols being put in a bin. Leeds and Southampton Atheists have both experienced intimidation when they proposed showing material that some Muslims took offence to’.

Schoolboy and campaigner against quack medicines Rhys Morgan also ran into trouble when he posted the same cartoon on his Facebook page. He received a barrage of hate mail and faced serious disciplinary action from his school.

In a separate incident, a debate at Queen Mary College about sharia had to be cancelled when a Muslim man filmed people there and threatened to kill them if they said anything negative about the Prophet.

The other side of the attack on freedom of expression comes from the probably well-intentioned but misguided liberal Left. A recent letter to the Guardian with a long list of signatories stated that 'over the past decade, a number of academic studies have indicated a worrying and disproportionate trend towards negative, distorted and even fabricated reports in media coverage of the Muslim community'. It called for an inquiry into media representation of Muslims on a par with the Leveson inquiry.

While it is true that Muslims often don’t get fair representation in the media, the conflation of religion with race and the portrayal of the Muslim community as a homogenous entity is becoming a way to blackmail and manipulate, to stop any questioning of Islamists and their activities, even the most serious attacks on human rights. Freedom of expression is being held hostage by a minority of religious extremists who are manipulating the well-intentioned but wrong-headed into silencing debate.

There are laws against inciting hatred and against attacks on individuals because of their race or religion. But Islam is not a race. And Islam is not Muslims. A religion is a set of ideas that anyone should be able to question, criticize or mock in public. It’s only through robust debate that human rights are protected, even if fundamentalist believers resent having their beliefs challenged. Only a person can be insulted, not a set of ideas.

Part of the reason the liberal left is being manipulated by extremists is the Japanese knotweed that is post-modern relativism. According to this, all truths are relative and all beliefs equally valid - even if this means that some people (for example women, LGBT and more moderate or secular/cultural believers) are not treated equally or accorded their Human Rights.

If Human Rights are mutable and vulnerable to demands from extremists and a violent minority, then they are not Universal, they are a pick and mix. If there is a hierarchy of rights, any privilege granted to one group means that other groups are seriously disadvantaged.

This relativism also forbids criticism of other cultures as colonial imperialism. It's one reason why dealing with Female Genital Mutilation and forced marriage is such a problem, for example.

If there is no freedom of expression and open debate of ideas in an academic setting, this bodes very badly for the rest of society, especially when the media and politicians either can't or won't defend free expression.

It should be made very clear that it's not just Muslims who want special consideration, there are many examples of Christian extremists claiming persecution, demanding exemption from Equality laws and trying to shut down criticism.

Other examples of how blasphemy is creeping back are here and here.

The National Secular Society’s briefing paper on Freedom of Expression is here . It has a series of useful extracts from the United Nations and Council of Europe on the defence of this Right.

The NSS submitted a response to the Police Powers Consultation to remove the word ‘insulting’ from section 5 of the Public Order Act. This states that it is an offence to use threatening, abusive or insulting words or behaviour, or disorderly behaviour, or displays any writing, sign or other visible representation which is threatening, abusive or insulting within the hearing or sight of a person likely to be caused harassment, alarm or distress thereby.

Claiming insult on behalf of a religion is becoming another weapon to silence debate. The NSS believes that insult is too nebulous a concept and too open to abuse. Its removal would protect freedom of expression and set the bar higher for a criminal offence.

There is a rally for freedom of expression in central London on February 11.

The situation at LSE and the other colleges is still developing and I'll post updates as they happen.

31 January LSE ASH have now been 'unaffiliated' by their Students" Union.
Posted by TK at 10:21 2 comments:

This week, Nadine Dorries MP failed to get a second reading for her amendment proposing that abstinence teaching should be promoted in schools - but only to girls, which I covered here.

But there really is no getting rid of her.

Now the Government has been accused of pushing ahead with her plans to strip abortion providers of their role counselling women despite her amendment on the issue suffering a heavy defeat in the Commons last year.

MPs voted by a majority of 250 to reject the Dorries amendment in September. It was intended to make women to see ‘independent’ counsellors before they have an abortion rather than be advised by abortion providers like Marie Stopes International or the British Pregnancy Advisory Service.

Public health minister Anne Milton said just before the vote that the Government would try to implement the spirit of Dorries' proposal without the need for legislation. She said: "The Government supports the spirit of the amendments, and we intend to present proposals for regulations after consultation."

It now appears that this is exactly what has happened. It's almost enough to make you believe in Dorries' god.

Shadow public health minister Diane Abbott said she had walked out of a new cross-party abortion group set up by the Government to look at the issue of counselling following the defeat. She said: "I now believe the 'consultation' will be a front for driving through the anti-choice lobbyists' preferred option without legislation or a debate on the floor of the House."

The group has been considering three proposals:
:
The first would see abortion clinics, such as those run by the British Pregnancy Advisory Service (BPAS) and Marie Stopes International, barred from providing counselling, and under a legal duty to refer women seeking it to an 'independent' service.

An second option is for voluntary registration. This would would mean any organisation offering counselling to women with a crisis pregnancy would have to meet minimum standards, and only use appropriately-trained counsellors.

The third option is to retain the current system.

As I wrote at the time, allegedly independent bodies of the kind promoted by Ms Dorries do in fact have a strong religious agenda and use a wide variety of manipulative, emotive and factually wrong tactics to talk women out of having abortions. I also wrote about how Ms Dorries manipulated facts in support of the amendment. Which is putting it politely.

For anyone who may have forgotten, this is the same Nadine Dorries who is on record as saying that her political blog is "70% fiction and 30% fact" and that "I have chosen the facts I wish to believe".

It's easy to dismiss her as someone with little influence who is easily ignored but her persistence and the apparent support of at least some parts of Government mean that she can't be ignored by anyone who cares about choice and women's rights. She really is the wasp at the picnic.

UPDATED 27 JANUARY
On Newsnight last night, Dorries and Abbott faced off. Abbott's performance was less than sparkling. Dorries made a few interesting points.

1. No abortion counsellor should have an agenda.

In theory, yes. But her idea of having an agenda is being paid by the state to do abortions, You might as well say that NHS dentists shouldn't be allowed to do fillings because they have a financial incentive. The film clip before the discussion showed so-called independent advisors with a strong religious agenda to put women off having abortions. She didn't address this.

2.Dorries says that counselling would mean 60,000 fewer abortions a year.

Her Government wants to cut Child Benefit. How does she envisage providing for these extra children? She has said this before but it's not clear where the figure comes from.

3. University-educated, middle class women who live in London are fine, they know what they want and where to get it. She is concerned for the 'vulnerable' others.

This implies that women who don't fall into her very narrow category are incapable of knowing their own minds or of dealing with what she calls a 'crisis pregnancy'. And, referring back to point 2, it would seem that there are at least 60,000 of them.

4. Dorries listed Frank Field as a pro-choice MP.
He backed her amendment so the choice he is pro would appear to be hers.

The Government says there will be a public consultation before any decision is made, possibly launched next month.
Posted by TK at 15:03 No comments: