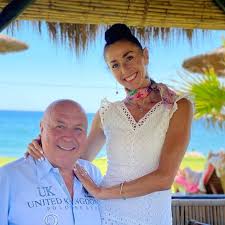 A glossy leaflet has appeared in my block called VACCINES ARE GENOCIDE by Dr Charlie Ward. That's him in the photo with his lovely wife.

Dear friend. This document contains valuable alternative resources regarding the monumental lies and deceptions that have been told to us by the Government and the (controlled) Mainstream Media over the COVID-19 "Pandemic" (which actually isn't one)... to further justify ever more extreme restrictions on our human rights.

That's a bit scary. Tell us more, Dr Charlie. I like my human rights.

The World Economic Forum appeared to be waiting for this exact event to impose a one-world centralised government.
The WEF has been criticised for many things including forming a wealthy global elite, being undemocratic and lack of financial transparency. So they're an easy target. But given that the Tories have spent the last four years shafting this country up the arse to get us out of Europe, how likely would they be to spread propaganda for a one-world government? Sovereignty and blue passports and the fishing industry and all that. God bless her Maj.
The leaflet then claims
Did you know that the "Coronavirus test" returned a positive result for samples from goats and paw-paw fruits?
Well yes, there were some faulty test kits in Tanzania that did this. Possibly. We don't know that this is true given that the President said he was sending a plane to Madagascar for a herbal cure and may have some other agenda behind questioning the efficacy of the tests. He refuses to say where they came from. He has also told the people to pray the virus away.
Also, sheeple,
Did you know that Bill Gates, the public face of the vaccination push, is NOT medically qualified? He is NOT a doctor.

So only doctors should be allowed to comment on the scientific accuracy of COVID and vaccine facts? Should we listen only to experts? In which case, mate, what is your area of expertise? What's your doctorate in?

His website says he has worked in the hotel industry for 30 years and now 'moves physical currency for many high-net worth individuals and governments worldwide'.

Far be it from me to be cynical but that's not any kind of scientific training I'm aware of. Moving physical currency sounds like a load of tenners hidden in the back of a van.

Anyway, back to The Science. He continues

Did you know that a challenge was issued to Boris Johnson on 22nd June 2020 to prove that the "COVID-19 coronavirus" actually exists by fulfilling the Kochs Postulate method of isolating and purifying a disease?

Ooh, now that sounds like proper science. The Kochs Postulate is a real thing. It was written in 1890 about bacteria. Not viruses. They hadn't even been discovered then. What's more, viruses, unlike bacteria, need host cells to replicate in so they can't be isolated in the Koch way. It's a bit like saying Boris should order someone to wave a divining rod over samples of the alleged virus to see if it moves.

More on this from the excellent Full Fact website.

What gives so-called Doctor Charlie the right to print this leaflet? He says:

Of course you do, mate. Magna Carta is probably the most misquoted and abused historical document ever produced.

Article 61 applied to 25 barons, not the general population. It was never incorporated into statutory law and was not included in later versions of Magna Carta, including the 1225 version, parts of which formed the basis of common law today. It does not grant the right to lawful dissent and rebellion that Doctor Charlie and others like him claim. You can read all of Article 61 here. The police must love it when anti-lockdown protestors quote it at them.

However, well done Dr C for calling it Magna Carta not The Magna Carta, a very common mistake.

So much for history. There's nothing in the leaflet that explains why vaccines are genocide, which races or groups are being killed. There's a bit of ranting about face masks and quarantine but nothing at all about vaccines. Maybe he's saving that for the next leaflet. Breath is bated.
In case Dr Charlie's word isn't good enough for you Doubting Thomases, he cites two unassailable experts,  Rachel Elnaugh of Dragon's Den and Denise Welch of Loose Women. Both of whom are, I believe, virology and public health experts of long standing.His site also promotes 5G and EMF protection and a Detox Toxins and Metals liquid. Because when conspiracy theories come, they come not single spies, but in battalions, to misquote Claudius (Hamlet).
Also, for some reason, you can watch his wedding video on the website (I didn't, sorry, the spirit of scientific enquiry goes only so far). And yes, he does have a book out.
On one level this incoherent pick and mix rant is funny. It didn't take me more than five minutes to check up on the goats and Koch and Article 61.The online world is full of guff like this. But if only a few people pick up the leaflet and it casts doubt on vaccines, social distancing, lockdown and other hygiene regulations, then it has done its job. Infection and hospitalisation rates have gone through the roof in the last couple of weeks where I live.
It doesn't help that this government has handled the pandemic spectacularly badly, that people are scared and confused about the ever-changing rules, and losing trust. Dr C and his like are opportunistic, exploiting this weakness. Almost like a virus.The leaflet ends Do You Understand?
Yes I do, Dr C, I understand very well, thank you for asking.
Posted by TK at 14:42 2 comments: