…. For I Have Sinned 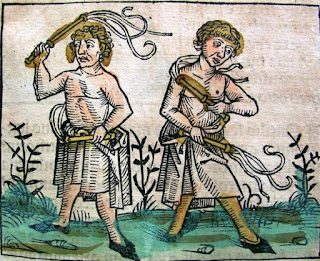 Why exercise is not an act of contrition

Shirley Cramer, chief executive of the Royal Society for Public Health thinks activity icons on food packaging will help combat obesity. The idea is to use stick people to show how long it would take to run or walk off the calories you’re about to eat.

The RSPH think that people are suffering from information overload in food packaging and that this will help – by giving them even more information as there is no proposal to replace the current labelling. Their research has found that 63% of people would support its introduction, with 53% saying it would cause them to make positive behaviour changes such as choosing healthier products, eating smaller portions or doing more physical exercise.

There are several problems with this approach. Firstly, who are the times based on? Everyone has a different metabolism and burns calories at a different rate depending on gender, height, age, build, lifestyle and so on.

The recommended calorie intake is 2500 a day for men and 2000 for women, based on some mythical average human. Averages can be useful as guidelines but it should be made clear that pretty much no one is ‘average’. I’m certainly not and nor is anyone I know.

Judging by the comments on the BBC article about this initiative, people don’t even understand what calories do. Someone commented on how long they’d have to run to work off 2500 a day, for example. We need calories to survive, they are not the enemy. It makes a big difference what constitutes those calories though – fats, sugars and so on. Eating 2000 a day is not going to keep you healthy if they’re made up of pizza and chocolate no matter how much you exercise.

You don’t just burn off calories while exercising. People who exercise regularly have a higher resting metabolic rate, which means that they burn off more even when they’re doing nothing just to sustain the extra muscle. What’s more, exercise is not just for calorie or weight control. There are many other health benefits, both physical and psychological.

The RSPH press release says that ‘it is hoped that ‘activity equivalent’ calorie labelling would help promote and normalise physical activity’. This is my biggest problem with the proposal – the intention may be to get people to be more active but it very strongly promotes the idea of exercise as punishment or penance rather than ‘normalising’ activity.

It’s like a Catholic approach to health – commit the sin and then do penance. Exercise is not an act of contrition and framing it as such helps no one. If guilt is your motivation and you hate every minute of your workout, you’re much less likely to keep up the exercise. Or, if you think you can exercise away the muffin, you have no reason to stop eating them in a cycle of sin and do penance, sin and do penance. As one woman told me, this approach is ‘reinforcing the notions that food has a moral value based on its calorific content, and that exercise is some kind of punishment for making arbitrarily-determined ‘poor’ nutritional choices’. Exercise does not wash away your sin and restore your moral balance.

A woman at my gym once said to me ‘When I’m as thin as you I can stop coming’. She wasn’t happy when I pointed out that the only reason I stay fit is that I keep coming. Forever. And ever. Amen.

There’s another worrying aspect to this proposed initiative. As a friend has pointed out, ‘This promotes an inherently disordered framing of what food and exercise are ‘for’. The whole idea of exercising simply to compensate for the food you've eaten is so triggering to people in eating disorder recovery who need to unlearn this bullshit in order to have a healthy and moderate relationship with food. This is so harmful, in the sense that it might actually trigger restriction and a return to disordered eating behaviours’.

This proposal comes from a good intention to help empower consumers to make healthier choices and to tackle the obesity crisis. But we already know that some foods are healthier than others. People over-eat for many different and complex reasons. If you buy crisps or chocolate, you know they are not health food. Who looks at how many calories are in a bar of chocolate and then puts it back? No one.

Making people feel guilty about their choices is not going to solve underlying psychological problems, nor is promoting exercise just to balance the scales. It’s not going to change anyone’s relationship with what they put in their mouth or with their bodies. When it comes to obesity, no one-size-fits-all approach is going to work.

As to the 63% who support the introduction of the activity icons – the road to hell is paved with good intentions. Also, the road to gyms making a profit is paved with people who join and then stop going after a couple of months. People often answer health questions based on how they would like to see themselves, how they would like to be, rather than on a realistic self-appraisal.

There is also the issue of practicality. Legislation on the mandatory labelling of food and drink is currently decided at the European level. Even if the political will existed and the food and drink industry was on board, it could take several years to happen. The industry is generally not so keen on ideas that discourage people from eating their products – unless they can sell us other products to counteract their effect. Maybe they should start investing in gyms.

Pray for us sinners.


The debate about cultural appropriation keep flaring up, much like the recently active Popacatapetl, and it does seem to be generating more heat than light. I’m surprised and disappointed that any of this still needs saying, but from what I hear and read on a regular basis, it seems it does.

Is cultural appropriation a useful or even correct term?

Ethnicities are not monocultures. Cultures are not monocultures. Typifying Indian culture (for example) by Southern Indian Hindu cuisine and then saying that cooking this food at home is cultural appropriation is in itself a kind of ignorant colonialism – they’re all the same over there. That’s like saying that all white people are Goths. If you’re going to talk about a particular culture, you need to define exactly what it is you’re talking about.

No culture is historically ‘pure’ even if some people like to think theirs is. It’s impossible to eradicate all elements of the Other. There is always cross-pollination. All cultures are an amalgamation of historical influxes and absorption. Even isolated jungle tribes have contact with each other and adopt elements of each others’ culture that suit them, while maintaining a sense of their own. The zero was adopted in the West because it made maths and trade easier. Better kinds of agriculture, metal working and medicine were acquired without asking permission. Not all of what could be called cultural appropriation is bad.

Historically, some markers of cultural identity were visible – clothes, food, music, for example. Others were less so – stories, private rituals, language. A shibboleth is defined as ‘a custom, principle, or belief distinguishing a particular class or group of people’. It comes from the Hebrew word shibbólet and its pronunciation was used to distinguish Ephraimites, whose dialect lacked a /ʃ/ phoneme (as in shoe), from the people of Gilead whose dialect did have it. In Mediaeval France, people separated themselves into Langue D’Oc and Langue D’Oil. It was a geographical separation that became a marker of custom, community and allegiance based on different ways of pronouncing the word for Yes.

Markers like this are rarely appropriated, mainly because they have no commercial or aesthetic value.

Nations and individuals have no problem selling aspects of their culture to outsiders. This can be to tourists in their own country or it can be by moving abroad and selling it to the natives – for example, by running a restaurant, selling carpets or holding classes in yoga or martial arts. That’s the foundation of export, after all. The people selling the culture decide which aspects of it to sell and may modify it for foreign tastes. They are in control of the dissemination and profitability of their own culture.

Claiming appropriation in this context denies individuals and cultures any agency of their own. They’re not capable of deciding what to do with their culture and can’t protect it so white, middle class Westerners have to do it for them. Then they can feel all virtuous by getting outraged on someone else’s behalf without actually stopping to ask that someone else if they’re offended.

Is it only appropriation if your culture has a history of exploiting or abusing the culture you’re accessorising? Is it appropriation if, for example, a Jamaican wears a bindi? Or is it not because it’s much harder for white Westerners to decide which group to side with?

There’s also an element of cultural protection. We don’t like to surrender aspects of our culture that make us different from Others. No one likes to see markers of their In group go mainstream. A degree of this is inevitable in an increasingly global culture but it’s not a new thing. In the distant past when groups were more isolated, each developed its own identity like speciation in isolated locations. As people began to mix more, often through trade or war, it became more important to be able to distinguish Us and Them, especially if one group was exploited or threatened. We’re an Us and Them kind of species, no different from many others. When resources are limited, it’s important to know who to share them with and who you’re competing with.

Refugees or immigrants often try to maintain their cultural identity as a distinct entity. It’s not a refusal to ‘assimilate’, it’s a survival instinct. It can bind them together in a difficult time and may give them a sense of comfort, strength and value. It gives them history, context and identity even though they benefit from and contribute to the culture they find themselves in. Don’t forget who you are, where you came from or what you have suffered.

What this all boils down to is power. Who is in control of the cultural copyright and who is benefiting from it? Are value, history and meaning lost or is it a fair exchange?

But any time a dominant culture discriminates against or exploits a minority or tries to impose their culture as the only valid one, establishing a cultural hierarchy while cherry-picking and commercialising the bits that are ‘acceptable’, that’s not cultural appropriation. Racism is the problem, not shopping. And that’s much harder to admit to or tackle than pointing the finger at a white woman in a cheongsam.