Sisters are doing it for themselves 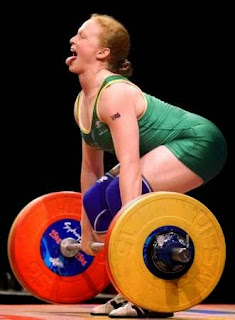 When I started going to the gym in the late eighties, weightlifting for women was fashionable. It fell out of fashion in favour of aerobics, spin classes and countless other fads. Now increasing numbers of younger women are lifting weights again and not just little tone-up weights. Serious heavy weights.

The gym I go to is mostly used by students and, in the last year or two, I've seen many more young women lifting a lot of weight. This is good to see. They're strong, fit, dedicated and smart. They don't use steroids or pose in competitions in bikinis. They're just naturally strong (naturally meaning they've worked bloody hard for it).

But, perhaps inevitably, the media has picked up on this and sees it slightly differently. There are countless articles ostensibly praising women who lift, some even trying (failing) to be inspirational. But many of them carry the message that Strong Is Sexy. These are just a few examples I found in about ten minutes. There are many, many more.

This video features powerful women. They have clearly worked very hard for a long time. Does the title respect their hard work, laud their achievements and encourage them? Does it hell. The title is Strong Is Sexy. The captions says 'What happens to women when they lift big weights? They get sexy as hell! The long-awaited 3rd female-only California Strength weightlifting video, the weights keep getting bigger, the action is more intense, and the girls are hotter than ever!'

They're not girls, they're women. Sexist, patronising and infantilising women - that's the hat trick, well done you. This is a girl lifting weights (bless her). See the difference?

There's no mention of how much they're lifting, as there would be with male lifters.

The Huffington Post had an article called Bodybuilding Women Prove That Fit Is Sexy with photo captions like Those Shoulders Would Definitely Look Hot In A Strapless Dress. Or under a comfy warm jumper in the winter.

In December the Daily Mail ran the article 'Women who lift weights now seen as 'attractive' by men'. According to them, 63% of men would rather date a girl that weightlifts and 74% say watching a girl use the bench is their favourite spectator exercise.

Yes, this is the Mail and they don't even say who ran the survey the stats came from. But the message clearly reflects common currency that women should get strong for men's pleasure. Gyms have mirrors so that you can check your technique and posture but when women look in them, it's the male gaze they see reflected back according to the media. And why have they put 'attractive' in quote marks? Do they disagree?

Of course we all want to be attractive to whoever we find attractive but this is about more than that. It's about reframing women's strength in a way that's acceptable to men. We can't just be strong. We have to be sexy too. And wear cute little gym outfits. Our strength is for men to perve over. Otherwise the poor little things might be threatened by us, emasculated by our biceps, quads and general awesomeness.

Building muscle is bloody hard work. For women, building upper body muscle is harder than for men. It takes a long time. You don't just have to go to the gym many times a week, every week, you have to eat right, sleep plenty, give up other things, learn about how to do it properly. There's a lot of sweating, grunting, swearing (just me?) and farting. Yes, when you squat, everything inside gets compressed and something's gotta give. Better out than in.

Most of the men at my gym who are serious lifters are great, very supportive of the women. But then, they know exactly what it takes to get strong. They're not scared of a woman who knows how to deadlift. How many of the Mail's 74% who want to wank over women bench pressing ever been anywhere near a gym themselves?

Health and fitness are something everyone should invest in if they can but for women, an extra layer is added, the pressure to be sexy and feminine. This is more likely to put women off than encourage them.

There are also lots of articles on line addressing women's alleged concerns that lifting weights will make them too big and 'masculine', explaining how to keep your muscles small and feminine.

Mixed messages. Big is sexy, but not too big, but here are some really big strong women who are sexy. Huh? Make your minds up.

To be clear: women don't have enough testosterone to get bulky and 'masculine' naturally. That takes serious steroid abuse. Here's a more detailed explanation.

Yes, this is just yet another example of sexism, of men trying to control women's bodies. But sometimes you just have to heave a sigh and call it like it is rather than letting it go.

Women work hard to get strong, they shouldn't have to hand that strength over to men, they should be able to own it.


For my gym buddy, the mighty Syasi, and powerhouse Carmen - you rock!

26 February: I just found this brilliant video about a woman bodybuilder in her seventies. That's what I want to be like when I grow up.

12 July: After winning Wimbledon for the sixth time, and her 21st Grand Slam, Serena Williams is accused of looking like a man. She has that rare combination of good genes, talent and hard work that make a champion but she still needs to be put in her place by men. This is what she looked like when she left Wimbledon. Not like a man, like a heroine to many girls and young women. 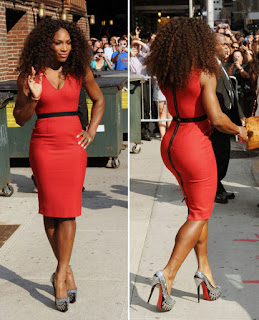