Don't Put That In Your Mouth! 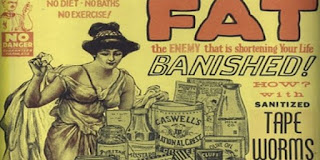 There have always been fad diets and people making money out of them, like Atkins or the grapefruit diet or swallowing tapeworm eggs. It’s getting harder to know who to trust as the diet messiahs compete for our money, harder to hack through the jungle of lies, empty promises and dangerous bullshit to find the truth. And lately the diet world has been getting vicious.

Weight loss means that using more calories than you consume. As simple as that. Cutting out a whole food group restricts calories, weight loss happens, but as soon as you go back to eating a healthy balanced diet or back to your unhealthy one, the weight comes back.

Nature abhors a vacuum so as soon as one fad loses its shine, another is spawned to take its place, along with all the expensive accessories – courgette rice, gluten free everything, spiralisers. That’s the marketplace in action.

Some messiahs are alert to public weariness with diet books and have rebranded their Gospel as ‘wellness’. Every single Wellness lifestyle is really a diet in disguise. All the Wellness messiahs are skinny and glossy and young.

Why are these diets a problem?
If dieting worked, there would only need to be one diet, everyone would do it and no one would put the weight back on. But that doesn’t happen. We have a short attention span. We want a quick fix, we all want to feel shiny and special. When one diet doesn’t work, we move on to the next one that promises us salvation. Life as a diet messiah is short. There’s always another one waiting in the wings so you have to make big claims to get attention and excommunicate the competition as heretics.

The problems start when essential nutrients or dietary elements are being missed – vitamins, minerals, fibre – or an excess of fat/protein raises risks of conditions like kidney stones, osteoporosis, heart disease, liver disease and so on.

Fibre is the orphan child of many current diets. Without fibre it is very hard to poo. Pooing should not be under-rated as long-term constipation can have serious consequences. It’s also a natural detox, along with peeing. So regular trips to the loo will save you buying all those detox products and laxatives (but not prunes as the European Food Safety Authorityruled that they do not have a laxative effect).

And of course carbs are cheap. Baked beans on wholemeal toast is a balanced, poo-friendly meal but it has no swank factor. Your Instagram followers will not be impressed.

Once you’ve invested in something financially and emotionally, you’re likely to defend it whatever the evidence. Cognitive bias means you’ll ignore the evidence against your beliefs and cling onto anything that appears to confirm them.

You’re part of a tribe. You read the book, buy the products, join the online forums, identify with skinny glossy, hench celebs doing the same diet, Instagram your meals and get thousands of Likes, worship at the church of your chosen messiah. And your tribe hates all the other tribes, especially the Science Tribe who will insist on pissing on your chips (which are made of lard if you’re on the low carb diet).

Do not dare to question the Chosen One or we will smite you with the wrath of social media. It’s all gone a bit Old Testament.

I’ve been harangued by women for daring to question their proselytising of paleo and of turmeric as a miracle ingredient in everything.

Margaret McCartney, who is a real medical doctor (unlike me), had the temerity to point out that fad diets like LCHF are not a miracle fix and received a shitstorm of hatred on Twitter.


Where’s the harm?
The risks of the LCHF diet are not hard to find despite the fact that its advocates can get pretty vicious.

Clean eating advocates are particularly vocal with their loathsome conflation of moral value and food which, in some cases leads to orthorexia and other eating disorders.

Sometimes dietary claims get even nastier, like the claims that dairy products cause autism and anyone feeding their child dairy is risking their lives.

Then they get nastier still, like the claim that the ketogenic diet can cure cancer.


It can’t.
Who can we trust?
Just as with other forms of fake news, it can be hard to know who to trust. The Pioppi diet is best described as ‘a superficial lifestyle guide based on distorted evidence’ even if one the authors of the diet book is a cardiologist. Most people would think it’s safe to believe a cardiologist. But as the author of this article points out: ‘Pasta is as central to the Italian diet as potatoes are to Britain’s. So too is bread. This is the elephant in the room for anyone trying to pretend that Italians eat a low carb diet’.


There’s another cardiology scientist recommending eating a lot of salt against all expert advice. Trust me, I’m a doctor? Maybe not.

Sometimes the boundary between saints and sinners is blurred. For example, in this video, a vegan looks at the evidence for the dangers of the keto diet. One of the experts he cites is called Paleo Mom. They both have an agenda but the science is right – keto can be very dangerous, especially for children. Because it’s not just middle class adults wasting their money and messing with their bodies.


Other fake news tactics the diet messiahs use include taking evidence and distorting it, making the false link between correlation and causation, cherry-picking data, using facts out of context, ignoring confounding factors that don’t suit them, picking an arbitrary period in evolution for which the evidence is obscure and declaring that is our most ‘natural’ diet.

It gets crazier
The next step is the conspiracy theory. The sugar lobby is undeniably powerful but conspiracy theorists have attributed it god-like powers to ensure that we poor fools think saturated fat is the devil.

As Antony Warner, the Angry Chef, says, this would require ‘paying off the medical establishment, the World Health Organisation, numerous charities, public health bodies and nutrition researchers around the world, and keep producing systematic reviews that show links between consumption of saturated fats and increased risk of heart disease.’


Once a conspiracy theory gets going, any evidence against it is taken as part of the conspiracy. The believers think that they and they alone know the truth. They feel powerful and clever and smug. And presumably constipated.

Yes, the parallels with religion are all there, the In Group and the Out Group, the access to privileged information, the righteousness, the smiting of enemies, feeling persecuted, the Gospels (the lucrative book deal is the Holy Grail of the Messiahs), the Way, the Truth and the Life. There’s no point being Saved unless others are Damned. Preferably on Twitter. 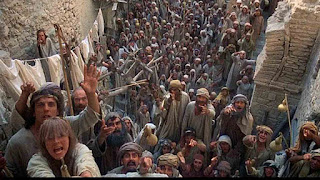 What’s the answer?
How are people to know what is a healthy diet and what isn’t? It’s so much easier to join a tribe and buy the book/watch the videos/follow a messiah on social media than to go and see a clinical dietitian.

Basically, if a diet involves eating less saturated fat, cutting out processed carbs but keeping whole grains, fruit and veg, reducing salt and sugar, reducing portion size and getting some exercise, it’s a good one. Basically, it’s just common sense. Which doesn’t make anyone any money.

Most people aren’t stupid but society puts pressure on us all to be thin and healthy. Desperation can lead us to make bad choices. The Internet should make it easier to get access to good information but the proliferation of messiahs makes it so much harder. They are all false prophets of diet salvation. We need to become diet atheists.