Are You Smarter Than A Chimp? 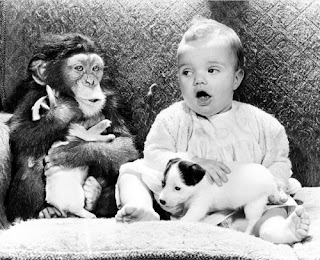 Yet more articles have appeared about how animals perform compared with humans; this time it’s chimps.

Experimenters at Kyoto University have found that one chimp can be trained to do a numerical short-term memory test faster than the average human can do it. The media love stories like this. There has been repeated coverage of the fact that crows are better at solving certain problems than children younger than seven – without being trained at all. There are also media favourites Alex the parrot and Koko the gorilla or the orang utans who have learnt to imitate human behaviour, for example hammering nails into wood or starting a fire.

Does this mean they are as smart as us or that they are natural imitators and problem-solvers, evolved cognitive skills that equips them to survive in their ecological niche? Hammering in nails is not a life skill that orangs need and demanding a nut is not one that Alex would need if he wasn’t kept in a lab.

Corvids in general and New Caledonian crows in particular are different from chimps in that they use innate abilities to problem-solve rather than being trained. But comparisons with humans are still false. The average corvid lifespan is around 20 years and they begin to reproduce from around three years old. They don’t have the luxury of a long childhood to acquire skills, they have to hit the ground running or they don’t survive.

Humans have solved the evolutionary problem of head size versus pelvis size by having young that are born in a relatively undeveloped state. Human lifespan and a long protected infancy mean that we have time to learn and develop before being set loose on the world. So comparing a crow with a child tells us nothing about either in terms of how ‘smart’ both species are.

There is a tendency to equate intelligence with consciousness and self-awareness. Humans have the ability to recognise ourselves in a mirror, an indicator of self-awareness. A few other animals have also shown this ability, as opposed to thinking the reflection is another animal, which indicates that they too have a degree of self-awareness. Again, the temptation is to add ‘just like us’. But these are all social animals. In social groups, the ability to tell the difference between yourself and another is a lot more useful than it is for solitary species. So this ability is an indicator of what is needed to survive in social groups, not of ‘elevated’ consciousness or intelligence.

One of the most successful species on earth is grass. It can live pretty much anywhere except the poles. All kinds of parasites have solved evolutionary problems in cunning ways, for example the lancet liver fluke Dicrocoelium dendriticum. These are most definitely not conscious species and yet they thrive. So is intelligence over-rated? Is it something we value only because, by our own definition, we have it? Who are we trying to impress?

There have been attempts to teach other animals to communicate with humans for a very long time. Some primates, for example, can learn to make signs or point to symbols to communicate with us. Alex the parrot could construct basic sentences. The fact that they can’t communicate in a complex human way doesn’t mean they are less ‘smart’, it means they don’t need to. Our more complex vocal communications are necessary in our more complex societies. The intricacy and (to us) the beauty of bird song has been summed up as ‘Fuck me or fuck off’ (attracting mates or warning off rivals). That’s all it needs to do.

If chimps needed human-type language, they would have evolved it. In evolutionary terms, cross-species communication is pointless. There are some monkeys that have learnt to recognise the alarm calls of other monkey species that share the same habitat and will respond appropriately to, for example, a snake alarm or a raptor alarm. But they are not communicating with each other. Apes only communicate with humans because they have been trained to do it for rewards in an artificial environment. This shows that they can adapt their innate skills to new tasks. It says nothing about their relative intelligence.

Most of the response to human-like abilities in other animals comes, not surprisingly, from headlines or TV programmes. But some academics don’t help. Researcher Tetsuro Matsuzawa, Director of the Kyoto Primate Research Institute says "Some humans are uncomfortable with the idea that beasts are cleverer than us, because we are supposed to be their intellectual superiors."

But the research doesn’t show that they are cleverer than us. It shows that they can use their innate abilities to learn tasks that have significance only to humans in return for rewards. You could say that chimps really like fruit and will do anything to get it.

It’s true that many of us still like to see ourselves as the superior species, which is mostly a Judeo-Christian hang-over from the Creation myth where God gives humans dominion over the animals. Some people don’t like it when other animals display skills we see as solely human (and therefore superior), maybe because it hurts our egos, maybe because the more ‘like us’ they appear, the harder it is to justify treating them in unethical ways (very inconvenient).

The claims that many human behaviours are unique has slowly been eroded. Tool use, warfare, problem-solving, social skills like empathy and even farming have been observed in many species (ants farm aphids and fungus). There is pretty much nothing we do that animals don’t, except possibly art. It’s a continuum, with humans displaying more complex forms of certain behaviours than other animals. But only because we need to in order to survive. It could be said that evolving our skills is a price we’ve had to pay to survive, not a crowning achievement.

Put a two year old human in the jungle and it wouldn’t last long. Most adult humans wouldn’t either but they are more than capable of crossing a busy road. Two year olds are rubbish at pretty much everything. But they do have the ability to make adults look after them. We have the skills and the ‘smarts’ that we need.

There are TV shows with titles like ‘Are you as smart as a seven year old?’ These should really be called ‘Can you remember the stuff you were taught 40 years ago that you haven’t needed to know since then?’ It’s the same mentality shown by articles comparing humans and other animals and the same basic error of not comparing like with like. Animals in the wild don’t learn skills that serve no purpose. Not learning how to hammer in nails but focussing on how to build a good tree nest is a better use of mental resources and smarter in terms of survival. It takes a lot of energy to run a brain and it makes no sense to waste energy on unnecessary behaviours.

The chimp at Kyoto outperforms other chimps in the same research programme, which tells us that some animals within the same species are better at certain things than others, not that this chimp is ‘smarter’ than us. The point is that every species is as ‘smart’ as it needs to be. That’s how evolution works. Other animals are experts at surviving in their niches just as we are. When their environment changes or new challenges present themselves, they adapt or die out. So do we.

Intelligence is a human concept, a trait we have defined in narrow terms to suit – and flatter - ourselves. But it’s not a competition. Chimps and crows don’t give a toss how many A Levels you have.

The answer to the question is – you’re asking the wrong question.