Don't Do That, Old Man 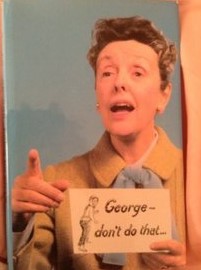 This is what happened to me this afternoon:

Old Man in supermarket: You're a big girl. Tall girl.
Me: Don't be rude. Fuck off. Don't do that. Would you say that to a man?
Old Man: No because he'd knock me down.
Me: Then why say it to a woman?
Old Man: You're a bitch woman. A bitch and a slag.

(I walk away as it is - for some reason - unacceptable to punch old men.)

That’s the third time in a week an old man has accosted a woman about her appearance that I’ve experienced. The first time was an old man in a hospital outpatients department. She was a nurse, her job is to care for people so she had to put up with "You’re an attractive women. You’re a very attractive woman" and on and on.

The other time, a young woman came out of the Tube as I was walking by, stopped for just a moment to sort out her phone and an old man appeared as if out of nowhere “Are you a model? You look like a model” and so on (she didn’t, she was way too short). Was he lurking, waiting for a woman, any woman, or did he just see her and jump in?

Is it supposed to be cute that old men do this? Is it supposed to be a sign that there’s life in the old dog yet? Should we be flattered that someone old enough to be our dad or grandad wants to fuck us – because, let’s face it – that’s what men accosting women in the street really mean even if they’re too old to remember the last time and they have not one single viable sperm left.

Often when I get comments I just ignore them. Yes, I am very tall but I still wouldn’t feel safe challenging a man unless there were plenty of people around me, unless I thought I could run faster than him or unless he was really old and feeble.  Just because women don’t say anything doesn’t mean we like it, it just means we know it’s safer to walk away.

Do really old men suddenly get it in their heads to start talking to women about their bodies or have they been doing it all their lives – or at least wanting to and now think they can get away with it? This kind of male privilege and intrusive, abusive behaviour doesn’t come in the post with the pension book and bus pass.

I tweeted about the woman outside the Tube and some man replied that it was ‘just biology’ as if humans in general and men in particular are just a bundle of instincts that we can’t be expected to control, as if we have no choice at all. A bunch of women then piled on and he soon shut up.

Yes, these were three very small incidents but they happened in quick succession, they happen all the time. In some ways it’s no easier seeing it happen to someone else because you know your turn is coming.