Modest Fashion - Don’t judge me in your Sister Wife dress. 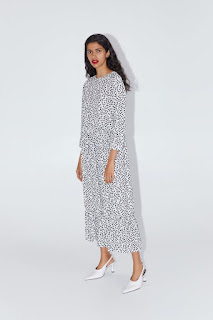 First off, women should be able to wear whatever they want without male input or consequences.

So-called ‘modest fashion’ is not just a trend.


It’s a style that’s been around a little while that went viral over the summer with the Zara dress pictured above. My first thought when I saw it was that it looked pretty Amish but that’s just me.

One influencer says ‘"I feel like women are now dressing not to be sexy for men”. She’s being very optimistic/naive and also talking as if there is no history of women’s fashion.

What man would say this?: ‎"I feel confident and most importantly comfortable. I know no matter how much I ‎eat you'll never be able to see my food baby." Why would you want to hide a full belly? Who are you hiding it from? Men? – but women aren’t dressing for men now, I thought. Other women? Yay sisterhood. Not.

Back to the fashion history thing. A woman who runs a fashion agency dedicated to modest fashion says: "If we go back to Britain in about the 1950s ‎modest fashion was the norm. Everyone had longer hem lines and long sleeves”.

Nope. Fashion in the 1950s was about post-war austerity and came from a long tradition of women wearing longer skirts. It didn’t come out of nowhere. Mediaeval women were not prancing around in mini skirts and I don’t recall any Victorian boob tubes. The word ‘modest’ was not part of clothing vocabulary and fashion had strong elements of class and status signalling. There were plenty of sleeveless evening or summer dresses in the 1950s. Don’t just show someone wearing autumn/winter styles and extrapolate from that. Remember the iconic photo of Marilyn Monroe’s white dress blowing up over an air vent? That’s from 1955. Which is in the 50s.

A quick debunk sidebar:
The Hemline Index suggests that when times are stable, hemlines get shorter (for example the 1960s) and when times are uncertain, they get longer (for example the 1970s) and there are more ‘comfort’ clothes. These are pretty uncertain times so it would follow that hemlines get longer – wouldn’t it? This may have been true in the past but fashion changes so fast now and is much more varied and accessible than it used to be so it’s much less of a reliable indicator. There is no one Look of the season. But it is true that when times are hard, we like to be comfortable and comforted. Sometimes. And other times we want to go out partying in something shiny and skimpy.

It’s not as if ‘non-modest’ clothes are uncomfortable and hard to move in, we’re not wearing corsets and crinolines. This is not some 1920s clothing revolution where women cast off the shackles of foundation garment hell.

There’s no mention of these larger clothes being better for larger women, that it’s a recognition of their needs. Nope. It’s skinny girls looking like they’re wearing big granny’s frocks.

There is an element of the fashion industry finally recognising that Muslim women have money and mainstreaming styles to cash in (the media is of course calling them Generation M). ASOS, H&M and M&S among others now sell ‘modest’ ranges. John Lewis says sales of midi dresses went up by 152% this year.

Fine, Muslim women who want to cover up now find it easier to shop and other women can get excited on social media about a new fashion trend without boring people like me raising the spectre of Cultural Appropriation.

But the language of ‘modesty’ and ‘hiding’ being parroted by non-Muslim women raises red flags of body shaming, fear of the male gaze and the implication that anyone not dressing like this is immodest and will face consequences. Yes, once again it’s women’s responsibility to cover themselves because men can’t be expected to control their urges and shouldn’t be distracted from doing important man things. While wearing whatever the hell they like.

The woman who said that women are no longer dressing to be sexy for men should remember that fashions come and go really quickly. Muslim women may continue to dress in a more covered way but the fashion world will count the money and move on - and the charity shops will be full of big shapeless clothes that no one wants any more. Women will still feel bad about their bodies and struggle with men’s behaviour. Freedom and comfort come from equal rights and equal treatment in a fair society. What's the dress to wear to get that?


Oh no, she’s gone all feminist-socialist over a bit of fashion. Here’s something from the modest 1950s to take the taste away.