Too Smart For God?


A new meta-analysis has found that intelligent people are less likely to be religious – if you believe the media coverage.

What often happens when research is published is that journalists read the press release or, at best, the abstract (summary) of the research paper. This is partly because of tight deadlines and partly because many journals charge for access to the full paper ($25 in this case). Then people who have a particular axe to grind jump on the results and get either outraged or smug, depending on the findings.

A meta-analysis is a study of studies. It looks at all the research done on a particular subject to collate and analyse the results. In this case, it covers studies done between 1928 and 2012.

The abstract begins: ‘A meta-analysis of 63 studies showed a significant negative association between intelligence and religiosity’. However, the abstract is not the whole story. The discussion at the end of a paper is where the caveats are found and give the full picture.

The paper is long and complex. These are just some of the caveats that need to be taken into consideration before any intelligent atheists start patting themselves on the back.

The percentage of males taking part in any survey or study had a significant effect on the findings. The more men there were, the stronger the finding that intelligence makes people less religious but the less representative it is of the population as a whole.

Education levels were not found to correlate with belief levels although college students were more likely to be or become non-believers.

No studies from outside the English-speaking world were included in the meta-analysis. The authors conclude that ‘Clearly the present results are limited to Western societies’ and that any negative correlation between intelligence and religiosity ‘may also be limited to the American Protestant population’ (my bold).

Without comprehensive and culture-appropriate studies of countries where the main religion is Hinduism, Judaism, Islam and so on, no definite global conclusion can be drawn. In some of these countries, cultural factors may affect the results. It may be socially difficult to be a non-believer in some parts of the West (particularly if you want to be a Head of State) but it's not life-threatening. In some countries, the intelligent position may well be to at least profess belief, even in a survey.

The researchers also acknowledge that measures of intelligence used in the West are not appropriate for all other cultures, particularly in the Third World. There's another reason to be cautious in evaluating any findings. While the ability to increase IQ test scores can be learnt, intelligence is an innate characteristic - but not a value-neutral one. There is almost always a value-judgement implicit (or sometimes explicit) when intelligence levels are identified. As with height in many cultures, more intelligent often means superior, better, more worthy.

Some of the papers analysed had flawed methodology when it came to measures of global intelligence. For example, one included this graph which appears to show that the average IQ in some countries is under 65. There are also some outliers that appear to indicate fewer atheists in 'more intelligent' countries. 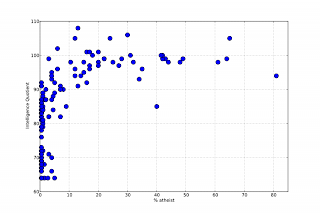 The meta-analysis also proposes various reasons why more intelligent people are less religious but admits that these are speculative and may well not apply in, for example, Scandinavian countries where there are higher percentages of non-believers.

Some of the reasons it proposes are that intelligent people are non-conformist, better able to resist cognitive bias and are more analytical. However, a poll in the Guardian (currently) shows that 74% of people agree with the finding but unless they’ve all read the research, this reaction is more likely to be based on wishful thinking and self-affirmation than on reason and analysis. The result may also show that Guardian readers are highly conformist with each other.

I’m not an apologist for religion, I’m an atheist and a secularist. It’s really important that those of us who claim to stand for reason don’t fall into lazy thinking, that we don’t let the media lead us by the nose into knee-jerk reactions that make us look as eager to believe anything that confirms our personal biases as any religious fundamentalist.

It's also important to remember that correlations don't apply to everyone. There will always be outliers - highly intelligent people who do believe and less intelligent ones who don't. A correlation is not one-size-fits-all. And it is not necessarily an indicator of causation.

Even if there turns out to be a global correlation between intelligence and belief – what then?

There’s the obvious point-and-laugh satisfaction for certain atheists but what do the rest of us do with this information? If belief is tied to intelligence then it could be harder to overcome or modify its negative effects on societies and individuals, to ensure equal rights than if it were closely linked to culture or education. The idea of religion as a virus that can be cured through debate or education fails. And, significantly, the people (men) in charge of religions are not stupid.

The last line of the paper is ‘Obviously, these conclusions are a topic for future research’. In other words, don't put out the bunting just yet.

The main problem here is that ‘It looks like there's a correlation between intelligence and religious belief among American Christians but we’re not sure about the rest of the world’ doesn’t make a very good headline.