A woman in Java is selling headscarves with magnets sewn into them to cure various ailments including headaches and tiredness.

Herawati Widodo got the idea when she read that magnetic devices could reduce pain and improve blood flow, apparently. She said: "We created this magnetic hijab for Ramadan last year. We wanted to create a headcover that is not only a nice accessory but also a healthy option. We have 21 models of headcovers and produce more than 2000 pieces a month". Scarves cost between $6 and $15.

There's a handy testimonial to go with the story: "I suffer from migraine headaches and it has stopped since I wore this," said Ari Istiani, buying her fourth magnetic scarf.
Magnetic therapy has been around since at least the 18th century when Anton Mesmer, a Viennese physician, got the idea that there is magnetic fluid flowing through everything. He claimed that he could unblock the flow with his magnets. After a while, he found that his patients felt better even without the magnets and decided to use his own 'animal magnetism' instead. But the idea of therapeutic magnets stuck around.

Today there are many claims made for magnets, from helping broken bones heal faster to making wine taste better. Pain relief is one of the biggest sellers. Products include magnetic bracelets, bands, insoles, back braces, mattresses - and now headscarves. Many professional athletes are very keen on them (magnets, not headscarves).

Annual sales are estimated at $300m (£171m) in the US and more than a billion dollars globally. So it's not just a negligible niche market for the gullible few.

The story has been widely covered in the South East Asian press, with a lot of women commenting on the story online, asking where they can get one. Scarves can be bought online (minimum order a dozen). I can't be absolutely sure this is the same company as all the news coverage replicates the original Reuters story and none links to Widodo's company.

However, this ad is as good as any for looking at magnetic headscarves. The claim is that it's 3,500 gauss neodymium magnetic under the jilbab can maintain the positive and negative ionic balance like yin and yang. This ionic balance can suppress the headache problem. The English may be flawed but it's good enough to include the get-out-of-jail-free card 'can'.
There are many many websites advocating magnetic therapy - mostly selling something - with a range of 'theories' about why they work (that they do is a given). These often involve helping the blood circulate. Vague sciencey words like 'ionic' are mixed with proper science terms like 'gauss' and touchy feely New Age terms like 'yin and yang' as in the advert above.
The evidence they cite is pretty much all just anecdotes of the 'it worked for me' variety. In other words, I used a magnet and I felt better. The woman with a migraine in the news story is a prime example of this. (Note that she is buying her fourth scarf - this is news in the sense of free advertising.)
I don't know much about magnets so I asked someone who does. He said that a 3,5000 gauss neodymium magnet would be very powerful - to the point that credit cards should be kept away from it. But would it cure anything? 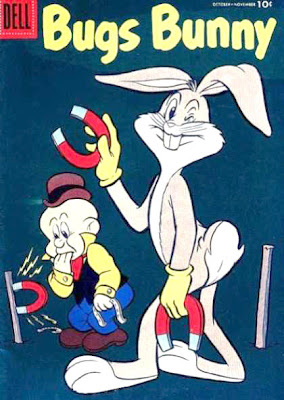 There has been little scientific testing and the tests that have been done have not found any demonstrable benefit. There is a BMJ report to that effect which you can read with follow-up comments if you have a subscription or here if you don't.

Why wouldn't it work?
Blood is not ferro-magnetic. In other words, yes there is iron in blood but it does not respond to magnets, not even really really powerful ones.
To get technical, a therapeutic effect is unrealistc because any magnetic effect is entirely overwhelmed by the thermal motion, not to mention haemodynamic forces in flowing blood. Incidentally, there is only about 3 or 4g of iron in the body anyway, and not all of that in the blood.
So what is happening?
Two things.
Firstly, our old friend the placebo effect. Pain is particularly susceptible to placebo.
Secondly, just because A happens and then B happens does not mean that A caused B. That's called post hoc reasoning and it's behind a lot of superstitions and 'alternative' remedies. A lot of complaints get better on their own. Headaches and tiredness, for example.
Actually, a third thing too - good old fashioned marketing that can turn crap into Christmas.
Finally, some little experiments.
1. Put some blood next to a magnet. Does it jump up like iron filings do in those experiments you did at school?
2. Walk into the kitchen. Do you feel an irresistible urge to join the fridge magnets?
3. Get in an MRI machine. Do you explode?
4. Do you find yourself inexplicably attracted towards the North Pole (magnetic North, of course)?
Perhaps someone could enlighten me why the women of South East Asia would particularly need magnetic headscarves during Ramadan.