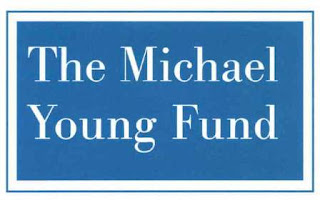 We received a small donation at work this week, inside a card. On the front, it had the picture above and said:

The Fund was established to disburse a small sum of money left by the late Michael Young who died in August 2000 shortly after his 100th birthday.
He was not a good man – quite the opposite. He was strongly anti-Semitic, had a deep-rooted distaste for coloured people, who he feared would pollute the white races, propagated a mean-spirited and unforgiving interpretation of Christianity.
He paraded these beliefs under the banner of patriotism, was a founder member of the League of Empire Loyalists and claimed, with pride, that he tipped a bucket of offal over Jomo Kenyatta, at that time President of Kenya, a member of the Commonwealth.
He corresponded with, and supported financially, Lady Birdwood and John Tyndall of the British National Party as well as various fringe religious movements. He wrote a number of poisonous pamphlets.
He was wholly self-centred, had no interest in anything beyond his Bible studies and preparation of his meals, neither read a newspaper nor stirred out of his house for the last 10 years of his life. It is hard to find any redeeming feature in the man.
So, it seemed a nice idea to pass a little of the money he left to some of the individuals and small organisations who try to do some good in the world, and, where possible, to ones he would have disapproved of.
His 'mean-spirited and unforgiving interpretation of Christianity' as well as his political affiliations mean he would have been horrified that any of his money should go to the National Secular Society (www.secularism.org.uk).
On the back, there is an explanation of how the Fund works:
If you like the idea of making small grants to decent people but don't want to set up your own fund, email a request for some of these cards to anthony@evelynwilliams.com. You can use them yourself or ask us to post on your 'grant' if you want to remain anonymous.
What an excellent and classy way to take revenge on a nasty old man. It's almost enough to make you wish there was an afterlife so his ghost could watch and be tormented by what is being done in his name. That would really be hell.
Posted by TK at 08:20