Marriage is for Adam and Eve not Adam and Steve 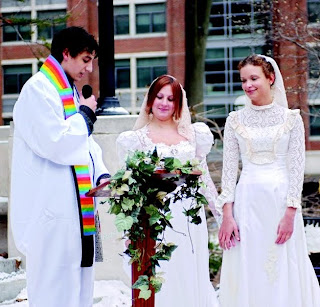 The Government is launching a consultation this month on same-sex marriage for England and Wales and there was a separate consultation for Scotland.

Various arguments have been used against gay marriage, these are some of the favourites:

It's unnatural
This is easily defused by pointing out that natural does not always equal good (eg disease, natural disasters, poisonous plants and venomous animals) while unnatural things are not always bad (technology, medicine, IT, cooking, clothes).

Marriage is traditional
This can be dispatched with a similar argument to the 'unnatural' defence - there are good traditions and bad ones, so in itself, the fact that something is traditional carries no weight. As Deputy Labour leader Harriet Harman said on the Andrew Marr Show: "We have had prejudice, discrimination and homophobia for hundreds of years, that doesn't make it right".

The State/government should not redefine marriage
Cardinal O’Brien, President of the Bishops’ Conference of Scotland and Britain’s most senior Catholic, has said 'No Government has the moral authority to dismantle the universally understood meaning of marriage'.

The Archbishop of York, John Sentamu, has said "I don't think it is the role of the state to define what marriage is."

The State already defines many aspects of marriage. It sets the legal age, who can and can't marry (for example, incest bans and bigamy law), the signing of the register is a requirement to legalise a marriage, the end of a marriage is defined in divorce laws. The State has also changed the rights of women within marriage and therefore the nature of marriage - for example the Married Women's Property Act, legal protection against domestic violence and the Custody of Infants Act.

What's more, Henry VIII as Head of State did exactly that (and started a new tradition while he was at it). He redefined marriage to suit his own ends - and laid the foundations for the Church of England in the process. Which has a certain irony.

Marriage between a man and a woman is a human right.
O'Brien has also said "In Article 16 of the Universal Declaration on Human Rights, marriage is defined as a relationship between men and women. … Their proposal represents a grotesque subversion of a universally accepted human right" and "If the Government attempts to demolish a universally recognised human right, they will have forfeited the trust which society has placed in them and their intolerance will shame the United Kingdom in the eyes of the world."

Archbishop Conti of Glasgow issued a statement complaining about ‘the modern preoccupation with human rights’.

It would appear that human rights apply only to heterosexuals. Or perhaps gay people are not considered fully human. It's hard to tell, with all the inflated rhetoric flying around. What O'Brien probably means is that gay marriage will shame the UK in the eyes of the Vatican.

Won't somebody think of the children?
Another argument from O'Brien is that "Same-sex marriage would eliminate entirely in law the basic idea of a mother and a father for every child." In schools, children will be forced to learn about gay marriage, he says - "Will both teacher and pupils simply become the next victims of the tyranny of tolerance?".

The tyranny of tolerance. As opposed the the tyranny of intolerance. The kind that leads people to harrass, threaten, discriminate and do violence against others.

It's as if allowing gay marriage would somehow detract from hetero marriage, devaluing it. Straight couples won't feel special any more, poor things.

Is there a law about 'a mother and a father for every child' ? Perhaps a lawyer could advise me on that one.

It's the end of civilization as we know it
O'Brien again: "Those of us who were not in favour of civil partnership, believing that such relationships are harmful to the physical, mental and spiritual wellbeing of those involved, warned that in time marriage would be demanded too. We were accused of scaremongering then, yet exactly such demands are upon us now"

It must be nice to be right. Those pesky gays, give them an inch and they take a mile. The ones who haven't been too damaged by civil partnerships to put a sentence together, anyway.

He continues: 'Redefining marriage will have huge implications ... for wider society. It will redefine society since the institution of marriage is one of the fundamental building blocks of society. The repercussions of enacting same-sex marriage into law will be immense."

People will have to buy a lot more wedding presents, for a start. Society constantly redefines itself, otherwise we'd all still be living in a feudal society tugging our forelocks, pondering whether women have souls and putting little boys up chimneys. Societies that don't evolve become extinct.

But don't worry, civilization already ended when those wooly-headed liberals allowed inter-racial marriage. Many of the same arguments were used against that.

Britain doesn't want it
Translation: Daily Mail and Telegraph readers don't want it. Poll after poll shows that the majority of the population support gay marriage and gay rights (they also support abortion, contraception and the use of condoms to prevent STIs). It's clear that religious leaders don't reflect the views of their flock. But this will not bother them. Their flocks have gone astray and need reminding of basic faith values. Or they will burn in hell.

Quite right, people should stand up and be proud of their bigotry. No one is saying that people don't have the right to say what they believe (within the law) but it is not their automatic right to have those beliefs given more weight than anyone else's. Some campaigners are claiming that there is now a hierarchy of rights with equalities trumping faith. But what groups like the Coalition want is for faith to trump equalities. They're happy for there to be a hierarchy as long as they're at the top. They claim that 'it's not fair' in the same way small children do when they can't get their own way.

The web site also warns us that 'If marriage is redefined once, what is to stop it being redefined to allow polygamy?'

This is known as the slippery slope/thin end of the wedge argument. It's surprising they didn't throw in 'and kittens will go blind'.

This could be a dig at Muslims or it could be a genuine fear that we are all secretly wanting multiple spouses. As if picking up one set of dirty pants from the bathroom floor wasn't enough (although they probably mean more than one wife because the thought of one woman and two husbands would make their heads explode).

Incidentally, their definition of marriage is 'the voluntary union for life of one man and one woman to the exclusion of all others'. So why aren't they campaigning against divorce?

Gay marriage is a vote loser
During the Scottish consultation, Catholic Bishop Tartaglia threatened a rift between Church and Government if gay marriage is legalized. His Church sent 100,000 ‘protest cards’ to its parishioners and asked them to sign a declaration against gay marriage.

Tartaglia may not have noticed that the Catholic Church and the government are not currently joined (or should that be 'married'?). His threat is a very good argument for the separation of Church and State, which would mean that religious leaders couldn't try to blackmail governments.

Equalities Minister Lynne Featherstone has warned the Churches not to polarise the debate (too late). She said "It is the government's fundamental job to reflect society and to shape the future, not stay silent where it has the power to act and change things for the better."

It's a shame this view doesn't extend to other areas of Government policy but at least on this one they're right. For once, the Conservatives are not being conservative.

Some religious groups have come out in support of gay marriage, including a coalition of Unitarians, Liberal Jews, Quakers, the Metropolitan Church and the Pagan Federation. Reverend Holdsworth, the openly gay reverend of an Episcopal church in Scotland said: “To behave as though bishops carry some kind of block vote to Holyrood, to threaten politicians and to decry those who want access to the dignity of marriage as unnatural, to say these things seems to me to go too far. Such comments from the leaders of the Roman Catholic Church have left me feeling embarrassed as a Christian.”

The anti-gay marriage lobby is very vocal, very organised and very well-funded. They will be responding to the consultation in their masses. It's important that anyone who supports gay marriage does too.

ADDENDUM: It has been pointed out to me by an ex-Catholic that the Catholic Church's opposition to gay marriage is partly because dogma is that marriage is for procreation and nothing else. There are also examples of a man in Brazil and another in Italy who were disabled and couldn't have children being denied a Catholic marriage. So if you can't breed (with each other), you can't marry. It all makes perfect sense now.
Posted by TK at 14:14